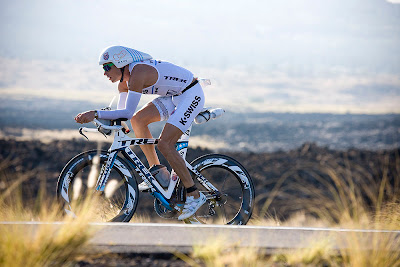 Champions are made through victory. It’s always impressive to watch an athlete who masters the measure of his/her sport and beats the competition to the line. In an event like last weekend’s Ironman World Championships in Kona, Hawaii, victory means showing the world that you're one of the greatest athletes on the planet. Multiple disciplines in 100+ Degree heat, for more than 8 grueling hours, clearly make this event one of the top challenges in the sporting world. And to win defines the victor as a champion.

It takes more than victory, however, to become a hero. To be a hero, winning isn’t enough. To be a hero, you have to capture the imagination of those watching; to go outside the lines of the expected and rise above whatever line might have been pre-ordained. Being a hero means scoffing in the face of “experts.” Sometimes it means sacrificing your success for another. Other times, it means doing something no one else thought was possible. It’s an expression of oneself on the pitch, or the field, or the road, or the trail, or in the water with such passion and determination that a person looking on is forced to pause, to stare, to take notice that they’re watching something truly extraordinary. It takes more than a win to fill our hearts with passion, and excitement, and a deeper belief in the human spirit. It’s that rare individual who isn’t racing against the competition, but against possibility itself that we come to call hero. It’s that person who looks deep into the eyes of “reality” and says, “come on out chump, we’re gonna have a go,” It’s the person who isn’t racing to win, but rather to find out what the limits of greatness look like who we call a hero.

On Saturday, in Kona, the greatest triathletes in world gathered to find out who was the champion. A 2.4 mile swim and a 112 mile bike ride, followed by a marathon to define the world’s greatest endurance athlete.

At mile 50 of the bike portion of the race Trek Athlete Chris Lieto took to the front of the race and dared the rest of world’s best Triathletes to hang with him. He once again proved that he was the fastest cyclist in the sport and quickly built a 6 minute lead on the field and a 12 minute lead on the race favorites. While the rest of the field jockeyed for position and used the variable speed increases of one another to maintain a blistering pace, Lieto ran alone at the front with only his self-will and pride to keep him in the lead. While the race favorites raced to see who would win, Lieto did something more. He raced to see how fast was fast. He raced to see where the limits of endurance were, not the limits of his competitors. In the face of the experts who said he could never hold them off, he ran at the front of the hardest race on the planet for 22 miles before being overtaken by the eventual champion and the sport’s top runner Craig Alexander. It was another 1.5 miles before the champion would eventually pull away. Again and again the announcers changed their predictions of when he would be caught as he courageously held off the run specialists mile after agonizing mile. Every self-proclaimed race expert said he would “fade off the podium,” that “he wasn’t a good runner,” but someone forgot to tell Lieto.

On Saturday in Kona, Chris Lieto road away from the best Triathletes in the world and dared them to, “come and get him.” It took 138.6 miles of a 140.6 mile race, and only the fastest runner the sport has seen for decades could answer that call.

On Saturday, in Kona, Chris Lieto allowed courage to be his guide and raced, not against the rest of world’s best, but rather against his own personal limits.

On Saturday, in Kona, Chris Lieto finished second in the world’s hardest race.

On Saturday in Kona, Chris Lieto became a hero.

It’s events like these, fueled by performances of the true heroes, those individuals who push the limits of possibility, that fuel us here at Trek to push the limits of bicycle performance. It’s athletes and performances like Chris’s this weekend in Kona, that make us look at the bicycle and stop saying, how can we be better than our competition, and start saying how good can we really be. We are constantly reminded by the people who ride our bikes that being a champion can only make you better than your competition; it doesn’t allow you to find the extent of your ability. It’s the ethereal place beyond that where we will continue to drive. At Trek we love building bikes for champions, but it’s the heroes that capture our hearts and drive us be as good as we can.

Thanks Chris for another fastest bike split, and for reminding us of the ingredients that make up success.

Thanks for Reading and remember:

Don't worry about where you're going, just keep riding.
Posted by Recovox at 10:49 AM