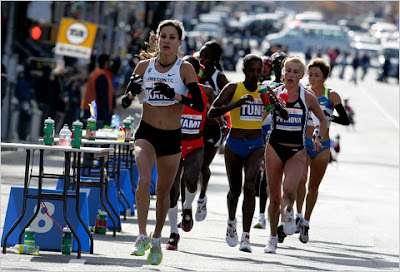 Olympic track star Kara Goucher last year set the U.S. record for an American woman’s debut marathon, with a time of 2:25:53. Ms. Goucher, who is coached by marathon great Alberto Salazar and in April finished third in the Boston Marathon, spoke to me about what the rest of us can learn from her experiences.

What can someone planning to run a first marathon learn from an elite runner like you?

I’m going to train at a different level than an average runner because I have the time to and the resources to, and that’s my job. But I can relate to your average runner absolutely. You just have to scale everything and put it in perspective of what you’re trying to accomplish. You’re asking a lot of your body no matter how fast or far you’re going. Running is something that hurts. It’s a wonderful thing. It’s a gift in my life. But it’s painful, and it hurts and takes a lot of time. Have patience. Stick with it and don’t expect results overnight.

Your Olympic events were the 5K and 10K. Why did you decide to tackle the marathon?

My coach really wanted me to try the marathon. He had been saying that for a couple years. I wasn’t convinced. The marathon is such a challenge. Just because you can run a 10K well doesn’t mean it’s going to transfer to the marathon. I kind of fought it. I went to the Olympics this summer, 9th in one event and 10th in the other. It made me realize how bad I wanted to be fighting for the win. When it came down to it, my coach said, ‘You’ll do well in 5 and 10, but you need to run the marathon.” I said, “O.K., let’s do it.”

We decided to do New York. It was a rushed preparation. I knew I wasn’t going to run the best marathon of my life in New York but I wanted to run a good solid first one. More time would be better, but I still was able to put together a pretty good marathon in eight weeks. Ideally you should have more time. I don’t think someone who decides they want to get fit should say, “There’s no way I can do it.” You will.

A lot of new marathoners are nervous about the race. Were you nervous running your first marathon?

I was terrified of the distance and the pain. You’re out there for so long. I was so scared I would get to half way and I would just start dying and have an hour left to run. I’m still intimidated by the distance. It’s daunting to think of running that long and that far. Even before Boston, even though I knew I could do it, I had only run 26 miles once before that. It’s a very intimidating thing to ask of your body and ask of yourself. There was a part of me that was afraid. I didn’t know if I could physically go out and run that far and that hard.

Most runners tackle their first marathon just for the sense of accomplishment. Can you relate to that?

During the race it was all about survival and keeping one foot moving forward, and it was physically the hardest physical experience of my life. When I finished it did feel tremendous. I felt like I had challenged myself in a way I never had before. It’s an amazing thing to see so many other people who do that too. It’s such a demanding task on your body and your mind. It changed my way of thinking, the way I looked at myself. It was such a tremendously hard thing and I accomplished it. It made me believe in myself more and my toughness and my tenacity.

How does running a marathon compare to running other events?

The two greatest thrills of my athletic career have been running New York and Boston, being around everyday people who are running so hard and excited to be there or supporting you and standing out there and cheering and carrying you through the streets. Some of the elite women were giving people high fives as we were running. There is nothing like it.
That’s one of the reasons I like it so much — other people get to be a part of it — whereas at the Olympics, I’m representing my country and all the people who have supported me, but it’s really about me and what I do. When I’m running the marathon so many people get to be involved even if it’s standing on the side. They’re giving you strength. It’s just amazing.

One of the big worries of new runners is getting injured. How do you deal with injury concerns?

I’ve had lots of injuries, stress fractures, shin splints, compartment syndrome, I banged up my knee. I know what it’s like to be hurt. In my running I’ve incorporated a lot more weight lifting and drills that give my body overall more athleticism. I think that helps prevent injuries. If you only have 30 minutes to work out, sometimes it’s more important to run 20 minutes and take 10 minutes to stretch and do weights and build your overall athleticism. I think that will keep you healthy.

Do you have any other advice for runners who are training for their first marathon?

I think it’s important to have patience and give yourself time and plenty of rest. If you want to start running and you’ve never run your entire life, that’s an amazing and wonderful thing. Don’t put pressure on yourself. My advice to people is to stay at it and take their time. Set small goals along the way and don’t be overwhelmed by the process.
Posted by Recovox at 7:00 PM