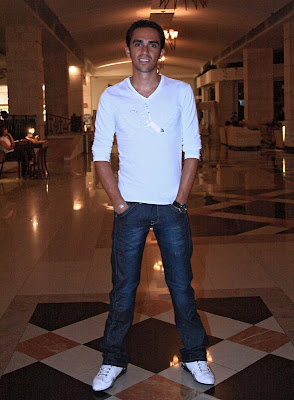 Alberto Contador is celebrating the official confirmation of his top position in the UCI World Ranking for the 2009 season today in Mexico. “For me, it was a great joy to win this trophy for the first time in my career,” said Contador, who is enjoying a few days’ holiday in Cancún after winning the inaugural edition of the criterium GP Cancún on Sunday.

Contador led the classification for individual riders, followed by two other Spaniards: Alejandro Valverde and Samuel Sánchez. This represents the first time in history that Spanish riders have swept the top three places in the UCI contest. In addition, Alberto becomes only the third Spaniard to have won first place in the UCI World Ranking, joining the likes of Valverde (2006, 2008) and Miguel Induráin (1992, 1993).

Contador assigned special value to this victory, which sets the standard for cyclists globally. “I’m very, very happy, because it’s an extremely important thing for a cyclist. I’ve been close in other years and finally I’ve succeeded. For me, it’s a sort of culmination of my career.”

Alberto returns to Madrid tomorrow, hoping to resolve remaining uncertainties about his future as soon as possible. “The first thing to know is what the UCI rules about Astana and, in the event that they keep the ProTour license, we’ll have to sit down and renegotiate my contract. But even in that case, not everything will be decided yet.”

After a week’s stay in the Caribbean, Contador says he’s spent a “wonderful holiday, that’s given me a chance to unwind and rest so I can go back to Spain fresh, because on Saturday and Sunday there are two criteriums waiting for me, in Oviedo and Alcobendas,” he concluded.
Posted by Recovox at 8:43 PM