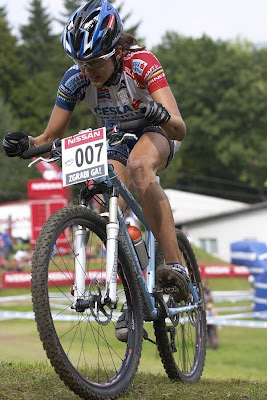 This season Tereza has beaten the best Czech women in the World Cup series. Her 6th place in Offenburg is so far the best, right after 8th place of Kateřina Nash in Spa 2006 and also Kateřina’s 11th overall position was beaten by Tereza’s 9th.

And what did the race in the ski center Pohorje in Maribor look like? After a good start, where Tereza and Katka were both in the top ten position, Tereza had a defect, she had to change her tire and fell behind to 35th place. It was a hard job for her to move her way up to her final 25th position. “I came to Maribor knowing, that this is my last chance this year to fight with the rest of the world and set right my mistakes from the World Championships and other races. I felt really well, I was in 8th position in the start loop at the top of the hill. The start was good, because right after the start was a wide road, so I didn’t have to ride elbow on elbow with anyone else. In the downhill part I passed Katka and kept moving forward, but then I suddenly heard the air coming from my tire, I came down from the downhill section with a totally flat tire. After having the defect it was very hard to find some motivation and continue fighting in the race, I was losing my physical power and also mental motivation, it was very hard and I didn’t feel well at all. I regret losing such a nice number like 7, I mean I rode this race with 007 on my plate, which had to evoke worries in my competitors,” said Tereza about the race.
Posted by Recovox at 8:10 AM