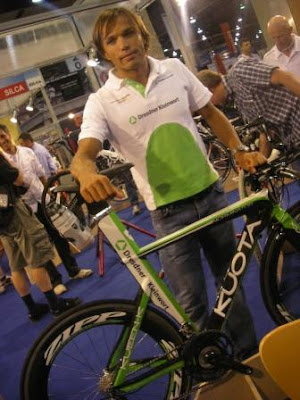 As a two-time Ironman Hawaii winner, you have entered a new, higher place in the sport's list of all-time stars. Your new agent Jan Wendt tells me you have made big changes in your sponsorships, management and in media exposure and public acclaim. Can you share some of your new enterprises?

Normann Stadler: With my new Principal Partner, Dresdner Kleinwort (an international investment bank), I am now in the lucky position to have a sponsor that really suits me. We share the same values and attitudes such as unconventional thinking, discipline and strength. Both banking and triathlon is a mind game!
The good thing about my new management is that they take all worries from me, so I can concentrate on what is important for me. The triathlon. The media concept is to create awareness for triathlon 12 months a year. Normally you have two or three big sport events in a season and that's it, you disappear.

IT: Jan also says you have made some big changes in your personal life? Can you tell us about some of them?

NS: Well, I am just a lucky man having the best time of my life right now. I have a great girlfriend, moved into new apartment and feel healthy, fit and strong.

IT: I have heard that you took over the unofficial championship of the the so-called German Loop in San Diego. You know, about 105 miles out to Lake Henshaw and back. Locals tell me you were the first to crack the 24 mph barrier on that loop - rated as a difficult Tour De France stage. How fast have you gone there? And how is it going so far this year?

NS: Well I am sorry, I don't know myself how fast I was on the loop. If I was really the fastest, I can live with it. Things are going well for me, if you leave out Frankfurt. I did some smaller competitions which I won and I think I could expand my capability on the bike while getting better in swimming and running as well.

IT: So you were quite fit going into Frankfurt and then you were surprised by back problems. Sorry to hear that! What caused it and how did you fix things?

NS: It was only bad luck that day. After the swim start I had a slight collision with another swimmer directly after the first buoy. I strained my back and the pain crawled into my leg when I was on the bike later. It got worse with every mile until I had to give up. To cure it, I did nothing special. I just took a small break, did some punctual training and let it heal the natural way with the help of a physical.

IT: Most observers were excited to see your close race with Chris McCormack last year and felt that Ironman Hawaii was one of the best ever. Many of us felt you both ran a perfect race for your own strengths - which made it a classic, a work of art so to speak. How do you see the race now in perspective?

NS: I saw the Ironman Hawaii always as a very fair competition. There are no excuses, only the best and strongest who resists the drift, the heat and the winds can succeed there. The last year showdown was really tough and we both reached our limit.

IT: Many people enjoy the smack talk and think this will continue to be an enjoyable rivalry that has been missing from triathlon. Do you think the Stadler-McCormack-Al-Sultan rivalry is good for the sport?

NS: Yes I think so, as long it stays a fair competition and we still respect each other. Chris, Faris and me we are totally different characters, no doubt. People who like me might not like Faris and the other way around. But just like in any sport, they can pick their favourite athlete and support him

IT: With your two Ironman Hawaii victories, you raised the popularity of triathlon in Germany - if that were possible. Yet the first year there was controversy that cast a shadow - Nina Kraft doping in 2004. You spoke out for integrity in the sport. Are you still worried for the sport's integrity?

NS: I am always worried about that and that's why I subject myself voluntarily to the strictest anti-doping guidelines ever seen (in the sport of triathlon). Together with the sponsor Dresdner Kleinwort and the National Anti Doping Agency (NADA), we worked out a pilot project to combat doping in endurance sport. Each year there will be 10-12 training controls, up to 2 pre-competition testings, post-competition testings and long-term chemical analysis with frozen blood and urine samples that are stored in a database.

IT: Five hours of live coverage of Ironman Hawaii in Germany and wire to wire live coverage of Frankfurt on German television. versus Ironman Live in Hawaii and one month later NBC broadcast in the States. Why is Germany ahead of the USA in its embrace of triathlon?

NS: It seems to become a German thing. In the past years, German athletes had big success in Hawaii. Plus, the Frankfurt European Championships are getting bigger and bigger and we have some great sponsors here. But I am sure the US will catch up soon.

IT: How important was it to get away from Germany and train in San Diego early this year?

NS: Very important of course. It is ritual and a constant part of my training plan for a long time now. And to be honest, the weather in Germany is terribly wet and cold this summer. I needed a break and a bit of the Californian sun. It never rains in Southern California.

IT: Any dark horses do you see contending in Kona?
NS: No
Posted by Recovox at 6:05 PM