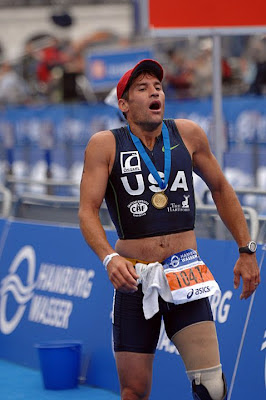 I headed off to Germany on Friday night, acutely aware of the pitfalls of arriving at an international race the day before. Namely, the prospect that one’s bike doesn’t make it.

You guessed it, got to Hamburg at 1:30pm but the Griffen Vulcan Rocketship remained at JFK and it didn’t arrive until after the next morning’s event. Remaining calm, a hallmark of my personality (cough), I knew I’d come up with something to ride; cruiser bike or not, I’d be competing. Tim Yount, Team USA’s director, the soon-to-be savior, is well-known in this little circle for handing these things. I finally found him at 6:15pm and a scant three hours later, as I lay in a half-sleep in my hotel room (the situation at hand made an actually sleep hard to come by), the knock on the door signaled something came through. Brandyn Gates, wife of age-grouper Trevor Gates, presented me with her near-perfect fit road bike! Faith, ladies and gentleman. When you’re a poor planner like me, you gotta have faith…

Like the NYC Tri a little while back, I laid in bed rolling and flipping and wrestling with the comforter trying to get some sleep. Jet-lag perhaps. In any case I got about three hours in before eagerly jumping out of bed at 5:15. Rrrrrrace Day!

Getting right to it (I know you, the reader, have got things to do), the f-f-f-freezing cold swim, in water so brown you literally couldn’t see your hand in front of you, took us under three bridges en route to the exit ramp – kinda cool. I got out behind, among others, fellow below-knee amputee Jeff Glasbrenner. I’d caught him at the halfway point and felt his presence the remainder of the ride and so did my best to put as much time on him and the others in my class as possible. While doing so on the second lap I was repeatedly disappointed to see the packs of young men passing me. The 20-24s who started in the wave behind us were on the first lap and blatantly cheating; age-group triathlon is a draft-free sport and these guys were committing the triathlete’s cardinal sin: drafting!

Off the bike and switching legs, with Jeff just a couple spots to my left doing the same, I saw an Austrian BK run by me getting started on the final leg of the race. Now, we’re the first wave and there aren’t a whole lot of us to begin with, so if another guy missing a leg passes me, I’m going to notice, and if he’s in front of me on and out and back course, I’m going to see him at or near the turn-around.

As I comment out loud on this, Jeff tells me he saw the guy blaze by him in one of the packs. This really set off the competitive juices, not to mention drew forth my R-rated vocabulary, and I took off after him. As I hit the 1k mark of the 10k run I was about to overtake him when the leg became loose. A few more of those words later and I was back in the hunt. I caught him a bit past the 2k, but another reboot at 3k rescinded the lead. Same at 5k. At 7k I was far enough ahead that upon the fourth reboot I was back in a step ahead of him. My temper was greatly tested and many bad words came forth with another reboot at 9k. By then the Austrian was off pace and I was back to focusing on the arm guy, a German.

I caught him in the finish chute with 100 meters to go and crossed the line first in my category, fourth overall behind a very fast partially paralyzed arm guy and two visually impaired competitors.
Posted by Recovox at 10:23 PM