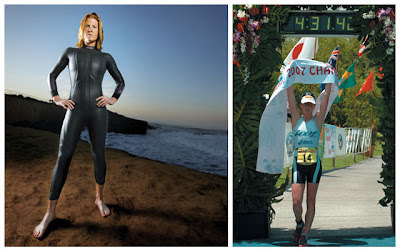 In these days leading up to the 2007 IM World Championships in Kona, Xtri is focusing on Kona contenders and the buzz surrounding the event. First up is Sam McGlone, 2006 Ironman 70.3 World Champion. She's a former Olympian and a force to be reckoned with at the half distance, and her inaugural full distance race will be none other than Kona. Will she surprise us on race day and make it all look easy? Read on for what Sam had to say about it all...


1. Tell us about your childhood – what type of student you were, what sports you were involved in, etc.

I was a geek/jock in high school. I got good grades and trained for sports even though it was cooler to be a slacker. But I had a great group of friends and we had fun too. I did cross-country and rowing in high school, but my first love was horse riding – I had to give it up when horses got too expensive…bikes eat less.


2. How did you get involved in triathlon? What was your first race like?

My first race was the Grimsby triathlon. I was last out of the water and walked my (Canadian Tire mountain) bike up the big hill. I loved the run though and passed a few people and thought, “ hey this is fun!”


3. You started out on the ITU circuit – what was that experience like? How did you transition from doing primarily shorter distance races to half Ironman and the 70.3 circuit?

The ITU races are so tough, it is a great breeding ground for future long course athletes. I think there will be a lot more in the future coming from the ITU circuit. They are very intense races so I started to do the 70.3’s as a way to get some long training in early season and have a more relaxed, fun racing experience. They long course is hard in a different way, but a lot less intense.

Amazing – it was one of the best experiences of my life. I’ll never forget walking into the opening ceremony’s with 80,000 people in the stadium cheering for Canada. It was a realization of a childhood dream.


5. Tell us what it was like winning the inaugural 70.3 World Championship in Clearwater. Do you think that short course athletes have an advantage at this distance over the iron distance athletes who race halves?

It was thrilling to win in Clearwater – I never dreamed one day I would be a world champion. It took a couple of days to sink in. I definately think the short course athletes have the advantage in the 70.3 distance. Most ITU athletes train for 4-5 hours a day anyways so to bring speed to a longer distance is much easier than coming down from an Ironman program.


6. Your first ever Ironman will be this October at the World Championship in Kona. Do you have any butterflies about your first crack at this distance being on such a large stage? What changes have you made to your training to get ready for this distance? Do you think your relative freshness (compared to the other pro’s who might have raced more than one IM already this year) could actually be an advantage for you? And most importantly, have you seen the designs yet for your Zoot race kit yet? :)

Of course I am nervous about making my debut at Hawaii, but also very excited to jump right into the “big one”. I am an all-or-nothing type of person so this is perfect for me. I have changed my training program completely to include lots of riding and long runs (and fewer swims which is nice :)). But I have still maintained a fair bit of intensity. I don’t do a lot of over distance, just try and go faster over the IM distances. I may be fresh in that I have not done an IM yet this year so that could work in my favour , although I did have a short course season so I probably raced more than most of the IM girls this year.


7. So far this year you’ve raced against 2006 IM World Champion Michellie Jones twice, and both times you’ve come out ahead. How do you think these performances (at the half IM distance) will translate to race day in Kona? Do you feel pressure to perform at a certain level at this race due to your credentials, or do you think you’ll be off the radar since it’s your first time?

I like to be under the radar – its always easier to be the dark horse. I think I may be considered a long shot, but no one really takes me as a serious threat since its my first one. I think it could go either way – I may have a great day or I may be flat on my face at 10 miles, who knows. IM is a very different beast then the 70.3.


8. You’re such a force to be reckoned with at international and half iron distances – any chance you might try for another Olympic berth in the future?

Probably not next year but who knows down the road?


9. You’re ending this season with a triumvirate of races: Kona, XTERRA Worlds and the 70.3 Worlds. What are your goals for each race? Have you raced XTERRA before?

I may not do Xterra – learning how to mtn bike while training for my first Kona was maybe a little too ambitious. I think I may just focus on recovering and preparing for Clearwater where I would like to have a crack at defending my title.


10. With so many victories under your belt, what professional accomplishment would you most like to achieve that you haven’t reached yet?

Winning the Hawaii IM of course :)
Posted by Recovox at 8:30 AM