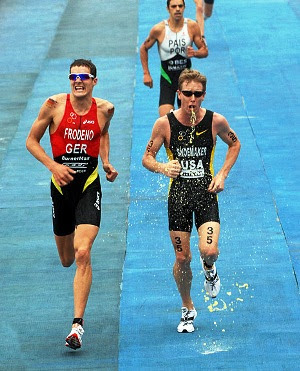 As he did at the BG HY-Vee World Cup in June, Shoemaker used a fast 31:37 run to finish first American. Today he was 11th overall, but more important - he outpaced US veteran stars Hunter Kemper (15th) and Andy Potts (18th) to grab the first US Men's Olympic Triathlon team slot by the throat.

More to the point, Shoemaker scored top American at the prestigious Hy-Vee World Cup in June, and came into Beijing under the radar until he blasted past Matt Reed, Kemper and Potts in the first kilometer of the run.

Shoemaker celebrated his first big victory in New York by hurling at the line. "I kept up that tradition today," said the 25-year-old star, wiping off the remain from his smiling face.
Posted by Recovox at 9:16 AM