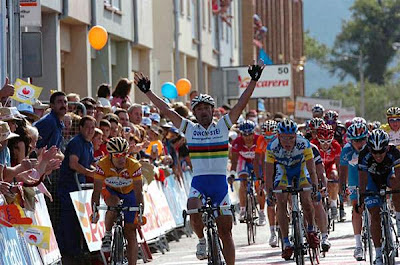 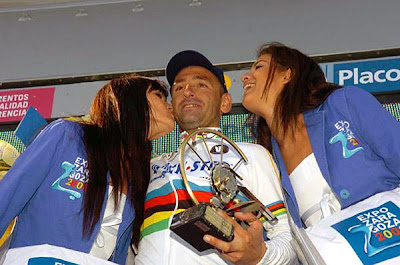 Reigning world champion Paolo Bettini says he's not superstitious, but he was probably having his doubts after what's been a long season for the usually prolific Tuscan tiger.

Bettini (Quick Step-Innergetic) came into the Vuelta a España with just one victory on the 2007 season and was relieved with his sprint victory Monday ahead of Oscar Freire (Rabobank) and Allan Davis (Discovery Channel) to end a winless streak dating back to February's Tour of California.

"I'm so happy with this victory. It really means a lot to me after coming so close to wins this season but always finishing second or third," said Bettini. "It's been a long time since I've won, but we're professionals and we know with the hard work, the results will come."
Posted by Recovox at 1:23 PM