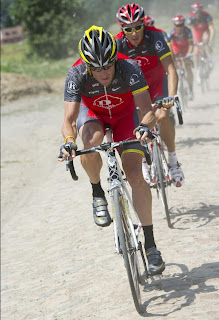 Lance Armstrong is convinced that the sections of cobbles during next Tuesday's third stage of the Tour de France could play a more for critical outcome in this year's race than has so far been predicted.

Armstrong and number of the other major contenders for Tour de France stopped to sample the cobbles on their way to the start in Rotterdam. A pedal may not yet have been turned in anger, but the psychological warfare began in earnest, when Lance Armstrong decreed via Twitter that stage three is “Going. To. Be. Carnage.”

Armstrong tested the seven sections of cobbles that punctuate the last 65km of the stage to Arenberg accompanied by his RadioShack teammates.

Speaking to La Gazzetta dello Sport after the ride, the Texan was enthusiastic about the stage. “It’s going to be a critical day. I predict that there’ll be twenty or thirty riders left in front. There’s no comparison with the stage to Wasquehal in 2004: there are more sectors of pavé, they’re harder and they’re closer to the finish.”

If past form is anything to go by, Armstrong and RadioShack can be expected to attack on the road to Arenberg in a bid to distance some of his rivals, with Alberto Contador the top of the list. In 2004 Tour, Armstrong used the cobbles to end Iban Mayo’s challenge in the opening daysof the race. He made similar gains on the Passage du Gois in 1999 and in the crosswinds en route to La Grande-Motte last year.

Armstrong denied suggestions that he is a man under pressure, given that it is his last Tour and his last chance to add a final chapter to his legacy.

“Pressure? The opposite. Less pressure”, he told La Gazzetta. “I feel excited, I feel ready, and it’s going to be great to try and win the Tour for the eighth time. These are three weeks in which I want to enjoy myself”.

Armstong went on to refer obliquely to the recent Landis allegations. “The most important thing is to be authentic. Nowadays in sport, nobody believes in anything anymore, even if you ride strong and are tested a hundred times a year. People doubt it when Bolt breaks the 100m record or Federer wins so many Grand Slams. It’s hard to fight against scepticism. No show, what you see is what’s there."

Astana, Team Sky, Saxo Bank and the Cervelo TestTeam also rode on the cobbles before heading to Rotterdam, studying the key sections and deciding wheel, tyres and tyre pressure.

Basso rode alongside teammate Roman Kreuziger. Basso will be riding his first Tour since being excluded before the 2006 race for his part in Operacion Puerto. 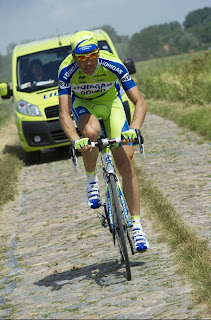 He was initially surprised by the severity of the cobbled sector of Sars-et-Rosieres. “It was a shock”, he said. “I thought to myself ‘if this is the easy section, that’s a good start! I became more confident between the first and last parts. But it’s one thing to ride it as a pair, quite another when you’re in the middle of the peloton.”

Other teams testing themselves on the cobbles yesterday included HTC-Columbia, Sky, Cervelo and Saxo Bank. Sky’s Simon Gerrans said afterwards, “I have even more respect for the guys who ride Paris-Roubaix every year”, while Andreas Kloden (RadioShack) described the last 30km as “incredible”.

Meanwhile, Andy Schleck (Saxo Bank), still suffering the effects of last week’s training accident, had an uncomfortable time on the cobbles. He tweeted that the ride was “not easy at all special [sic] with my wounds on my hands! Ouch!”

And Tour favourite Alberto Contador? He was shadow-boxing on the cobbles as long ago as April, with 2003 Paris-Roubaix winner Peter Van Petegem as a sparring partner. In the anxious game of inches that is the Tour’s first week it seems that every little advantage helps.
Posted by Recovox at 9:11 AM