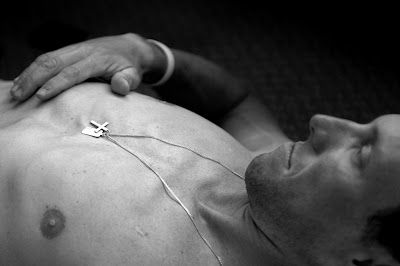 Every Tour de France since 1999, I’ve carried the same good luck charm with me. It reminds me of a friend who helped me beat cancer and start my true mission in life, the fight against this disease.

In January of 1997, Stacy Pounds helped me launch LIVESTRONG, a foundation that serves people and families affected by cancer, just as I was completing my own cancer treatment. That same month, Stacy, a chain smoker, was diagnosed with incurable lung cancer.

All of us who knew her were devastated. My mother gave me two crucifixes. I wore one and gave the other to Stacy. I said, “This is going to be our bond. You wear it when you’re being treated or whenever you want. And I’ll wear mine forever.” We wore them as symbols of our cancer kinship.

Stacy deteriorated quickly. The doctor told us she only had a matter of weeks to live.

Stacy’s son, Paul, was a sailor serving with the US Navy at sea. We called Charles Boyd, the only four-star general I knew, for help in getting Stacy’s son home to see his mother. “Lance,” he said, “I lost my wife two years ago to cancer. I’ll see what I can do.” The next day, Paul was on his way home. That’s what the term “cancer community” means.

At the same time, Stacy went into a nursing home. “I’m in pain and the nurses don’t bring me my pain medicine,” she said. We took her home and hired a full-time Hospice nurse to take care of her.

Her son arrived and Stacy spent her remaining days at home with him. On October 2, 1997, I celebrated the one-year anniversary of my cancer diagnosis. On October 3, 1997, Stacy died. She was buried with her cross.

Despite the standings, I know that good luck rides with me every day. I am riding for Stacy and the 28 million people around the world living with cancer today.
Posted by Recovox at 11:43 AM