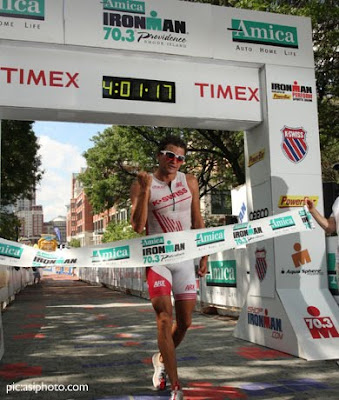 Your year this year has been phenomenal – we’ve written thousands of words extolling the virtues of Terenzo Bozzone and how wonderful your season’s been. Highlighted by numerous victories and numerous second places. How tough has it been for you physically to maintain that type of level?

Firstly Phil thanks for all the kind words, I see you when you tweet that you’ve got a new article and I start reading it and I just crack up. I kind of bow my head in a little bit of shame because it’s a little bit embarrassing, so thanks a lot for the kind words.

This year, it’s been interesting. I like to do things a bit differently so the amount of racing I did over April, May and June was a little bit extreme but I really enjoyed it. I felt my recovery between the races was good and I felt I managed to look after my body enough and get the right types of training in to make sure I didn’t lose too much form.

Are you beat up? Do you feel beat up in your body? Has it taken so much time to recover? Are you doing much training or is it just recovery?

Yeah well I’ve actually got to probably six races, the seventh race I started to feel a little bit beat up, so the seventh race in Buffalo Springs I came second behind Lieto and then the eighth race was in Rhode Island. By just going into the race I was a little unsure. I missed my plane leaving LA and I was wondering if that was a sign to just give it a miss and not fly across the country to race, but I’m glad I did and I managed to have a strong race. You definitely feel your body gets depleted from all the good nutrients and you’re just always on that red line. Your body is depleted, your immune system is really low and you’re kind of almost ready for it to stop.

Does one race blur into another? Or is it every time you get to a race you get excited again and you start feeling a little bit of the nervous energy before you start?

Yeah I do, I do get somewhat excited and a little bit nervous. One of the toughest races was Galveston 70.3 in Texas. That was doubled up as the US National Champs as well. So this was the second race. I raced in New Orleans the week before and got second to Andy Potts and had a bit of a tough week and didn’t really feel the greatest all week and woke up on race morning about 4 o’clock and I just couldn’t get out of bed. I was just really tired, I just wanted to stay in bed I didn’t want to go outside. I had to almost drag myself out the door to get my warm up going and it wasn’t until about halfway through the warm up that I started to come around and was really going. I think that ended up being one of my better races, I felt good and managed to push it from start to finish.

How soon into a race do you know that you’re on form? When you start? as soon as the gun goes off and you start swimming do you feel that you’re going to have a good one or does it take a little while for your race to evolve?

Yeah for me I don’t really know what’s going to happen until I’m on the run, probably even halfway through the run and it will often change through the day. I mean I’ve had races where I start the swim and I feel a million bucks and once I get on the bike I’m out the back door struggling or vice versa, I’m swimming and feel like sh+t and get on the bike and you feel, I mean your legs – you can’t blow yourself up.

Are you friendly with the other athletes, are you someone who likes to chat around the transition area or is it stick my iPod in and get the eye of the tiger working?

A Well that’s the good thing about triathlon is all of us are pretty good friends. I mean I hang out with Macca, I hang out with Craig from time to time, I mean all those guys, Richie Cunningham and Tyler Butterfield. We turn up at a race and every day before the race you train together, you have coffee together, you have breakfast together, dinner and so you’re best of friends one day, you wake up the next morning and transition, your still civil, you probably keep a bit more to yourself, but when that gun goes off you want to kill that guy. You want to make him suffer. And then once you’ve crossed the finish line you’re the best of friends and then you cross the line, shake the guy’s hand and then give him a hug and go off for lunch.

Is there any smack-talking on the bike? Is there anything like that going on or is it more you think Triathlon is more of an individualised or internal type of activity?

From time to time there is a bit of smack, the bike, of course it is going to be easier sitting five bike lengths back, but generally there’s a bit of etiquette out there between the athletes. I mean no-one wants to get on the run after sitting at the back behind someone for the whole bike and run away to win the race. That’s – you almost have to cross the finish line with your head below your hands just so you save a bit of face. I mean yeah, so everyone tries to get out there, do their fair share of work and try and keep it as fair and as even a race as possible. Of course people are going to have bad days where they can’t bike and they get off and they do feel a bit on the run, but most of the time everyone tries to show good sportsmanship out there.