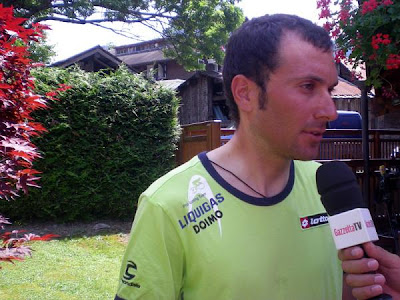 Ivan Basso speaks to the press on the Tour's rest day in Morzine-Avoriaz.

Ivan Basso (Liquigas-Doimo), 13th overall and 2:41 behind Cadel Evans (BMC Racing Team) on general classification at the first rest day, is looking for better results in the upcoming two thirds of the Tour de France. The 32-year-old Italian doesn't blame anyone but himself for the time lost on the cobblestones and predicts Lance Armstrong (RadioShack) will still be an important rider in this race.

"I think the first part of the Tour de France hasn't been very good for me because I came out of the cobblestones stage with more of a deficit than I should," the winner of the 2010 Giro d'Italia told reporters during the first rest day in Morzine. "It's partly due to bad luck and partly my fault. A rider like me should have been in the first positions but my problem in my profession is my lack of agility that penalizes me and costs me too much energy. But this is the Tour. It's so competitive, it's not simple to do just what you want."

The captain of Liquigas-Doimo felt reassured after the first mountain stage. "It takes me back to the same ambitions I had before the Tour started," Basso said. "Yesterday I was at the front at my ease. But this stage has said very little about the hierarchy of the Tour. All the favorites are still up there. The only thing that happened was Armstrong's bad luck. His crash has jeopardized everything.

"You know the respect I have for him and the friendship I have with him. He arrived super-determined but now the yellow jersey is unworkable. This morning I've seen him on his bike, it means he wants to do something in this Tour before the end.

"We've done only one third of the Tour," Basso said. "There is the second third coming and the third third! I don't remember in my whole career having experienced such high temperatures. Yesterday again it showed 40 and 41°C on my SRM, that was with other riders surrounding me. Therefore, we don't know what's going to happen next in this race. Maybe those like me and [current race leader Cadel] Evans who have done the Giro will benefit from the foundations we have, or we'll be killed and put on a cross by those who will be fresher because of not having raced much."

Basso hopes for "regularity and consistency" to be the key factors for him to ride for the final podium. He also counts on his association with Roman Kreuziger at Liquigas-Doimo. "Our strength is to be together when the front group will be only about ten riders," Basso said. "I'm very confident in my teammates. A climber like Sylvester Szmyd will be seen more when the race will be less aggressive. I'm convinced that my team will be well present at the hottest moments of the race.

"In yesterday's front group, about 50 percent of the athletes were young ones," said Basso, who has returned to the Tour de France five years after his last participation and encounters new adversaries. "They are more explosive than me. To beat them, I'll use my experience. Yesterday, Andy [Schleck], Contador and Kreuziger were the most brilliant. I haven't mentioned Cadel [Evans] yet but he's an athlete with expertise. He's got tenacity and resistance."
Posted by Recovox at 10:56 PM