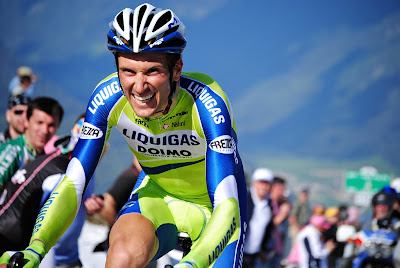 After a week of racing over flat and rolling terrain, including cobblestones, the Tour de France peloton will head into the mountains on Saturday. Stage 7 is somewhat unique, however, in that it’s falls into the category of a “medium mountain stage”. This means that there are significant climbs on the route (six categorized ascents), but that none of them is so hard that the whole peloton sits up and says, “Oh, that’s going to hurt.”

Still, on a medium mountain stage, the climbs are hard enough to split the peloton into groups. The sprinters who have dominated the past few stages are not likely to be in the front group on the final ascent of the day – the summit of which is only 4 kilometers from the finish line. Rather, the sprinters and many of the team workers will be left behind by the team leaders, who will make sure that a few of their teammates stay in the front group for pacing, nutrition, and mechanical support if necessary.

The yellow jersey contenders typically wait until the major mountain stages – days like Sunday and Tuesday coming up – to launch their big attacks. That’s because the mountains in those stages are steeper, longer, and much harder. It’s on this extreme terrain that the best of the pack can really challenge each other and take advantage of their abilities to go uphill fast. On more gradual climbs like the ones in Stage 7, the grades are not that steep, so bigger riders like Fabian Cancellara – the current wearer of the yellow jersey – still have a chance to keep up. Once the race reaches the big mountains, the grades are steep enough that the advantage really shifts to the lightweight, very powerful riders who are either climbing specialists or yellow jersey contenders.

That said, there are yellow jersey contenders in the race who are very motivated to attack and either gain time over rivals or make up time lost already in the first week. Lance Armstrong is looking to make up time he lost on the cobblestones of Stage 3, and if he sees an opportunity to make a move in Stage 7, he’s likely to go for it. Similarly, Alberto Contador – the defending champion – may look to Stage 7 as a great place to attack, not because it’s a good stage for building a Tour-winning lead, but just to stamp his authority on the race and deliver a psychological blow to rivals hoping to challenge him in the bigger mountains to come.

With Stage 7 acting as somewhat of a prelude to the major climbing battles coming in Stages 8 and 9, don’t be surprised if tomorrow’s stage winner is a lesser-known rider, or a well-known rider who doesn’t have a realistic chance of winning the Tour de France this year. Stage 7 is a great day for an opportunist because it’s hard enough that a breakaway containing strong climbers could make it to the finish before the yellow-jersey contenders. It’s also hard enough that the sprinters and their teams won’t be pushing the pace to reel in the breakaway to set up their speedsters. Another likely scenario is that the main peloton could reach the 10- or 5-kilometers to go banner all together, and an opportunistic attack from a rider who is no threat to Contador, Andy Schleck, Cadel Evans, or Lance Armstrong goes off the front. If the pre-race favorites sit back and watch each other, the man who dared to make the attack could ride away with a stage win at the Tour de France!
Posted by Recovox at 1:40 PM