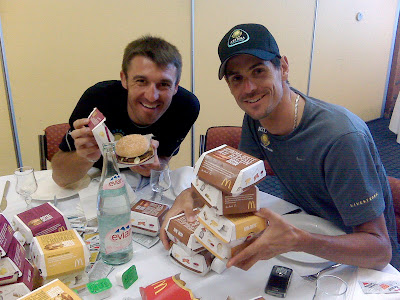 Of all the questions that are asked around the Tour de France, one of the most common questions is about the amount of energy (kilojoules) that these grand tour athletes expend and how they replace it all.

The short answer is that they actually don’t replace it all. Some of the most successful riders who finish strongly on the last day tend to lose the least amount of weight. On the other hand, the riders who pull out halfway through the mountain stages or fall to the back of the pack usually experience a greater weight deficit than their more successful counterparts.

There is something to be said for this difference. Certain athletes are more genetically gifted and can absorb much more carbohydrate than others…but they all train hard, and it’s the specific training that helps to maximize the ability to absorb those Calories. Before we go on, I should mention that kilojoules are roughly equivalent to dietary Calories, so if you see a ride of 800 kJ’s you can assume it is close to 800 Calories. Efficiency changes this and with the most elite athletes (like Lance) you can expect a slightly lower Caloric expenditure for an 800 kJ ride than an amateur for the same amount of work.

Many of us have seen the posts that Saris/CycleOps have done where they detail the expenditure, power, speed, etc of grand tour athletes. This gives us great insight into just what they are capable of. In the link below you can find an analysis of one of Danny Pate’s rides during the Tour de France:

Getting down to just the kJ’s, we see that he rode for a little over 4 hours that day and did a total of 4,177 kJ’s of work. On an hourly basis this works out to 982 kJ/hour – a very sizeable amount for any athlete. So back to the question of how these athletes make it through the stages with such high energy expenditures.

It’s nearly impossible to replace as much as 5900 Calories each day, so naturally athletes will lose some weight during a grand tour. However, the key is that they consume a high amount of carbohydrate and have been consuming enough Calories to maintain high glycogen (stored carbohydrate) levels before the Tour starts. There is also the matter of adapting to a high energy intake. 94 grams of carbohydrate would give most of us some of the worst GI distress we’ve ever experienced, but these athletes have been able to train their bodies to consume this for the simple fact that it’s a requirement for success at this high level of competition.

So while you are watching the Tour in July, watch what these guys are consuming on the bike and you will surely have a new appreciation for what it takes to compete nutritionally at this level of cycling. Some practical recommendations for how you can use this to your advantage with nutrient timing and strategy will be coming after the Tour. Enjoy the racing!
Posted by Recovox at 10:00 AM