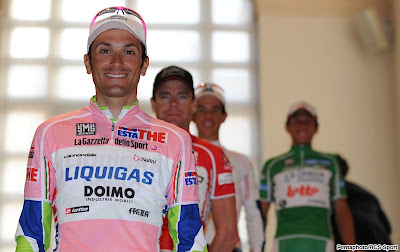 It seems that redemption is complete for Ivan Basso. On Sunday afternoon the 2006 Giro d'Italia champion secured another title in his national tour and announced the impending birth of his third child.

Liquigas' captain has been unequivocal in declaring that this latest victory is completely different to that which he took four years ago and during the race's final press conference, after pulling on the maglia rosa, he admitted that his victory marked the start of a new phase of his career.

He explained that the Giro had been a hard race but success has galvanised him and made him believe he can now take on Alberto Contador at the Tour de France in July.

Ivan Basso: The emotions of the last few days have all come true. I'm really happy. It's hard just after the race to understand what I've done, it'll take me a few days to take it all in. It's been a fantastic day and to finish in the arena with my children there waiting for me."

A few days ago my wife told me that were going to have a third child. I'm happy to tell everybody the news today.

Is this the start of a new part of your life?

IB: For sure it's a start of something new for me. I'll be 33 at the end of the year. I think I can still be a protagonist in the Grand Tours. It's the start of that new chapter. There are some really strong riders out there. One is my teammate Vincenzo Nibali but there's also Alberto Contador, Andy Schleck, Contador, Robert Gesink and others I can't remember but don't want to forget.

There's a generation of 23-or 24-year-olds too, riders like Richie Porte here, [riders] who will grow and develop, while I'll grow old. I'll keep going till the road tells me to change objectives.

But after this performance I'm very ambitious, starting with the next Tour de France. I know that Contador has done some amazing things, I know it won't be easy but I've got to fight.

As I said at the start of the Giro, even if I finish behind a rider like Cadel, I'd lose with honour. It will be the same at the Tour with Contador."

After what you've shown here, can you match Contador in the mountains?

IB: "I haven't thought about the Tour de France yet. I know it starts in Rotterdam and finishes in Paris and that's it.

I don't know what I can do against Contador because I've never raced against him at his very best. But what he did in the last fours years is amazing improvement.

I believe I can do something but as ever, with a lot of respect and humility. It's the way I've done things in this Giro and I'll have to do the same in the Tour de France.

The team will be behind me and united. We'll do our best but we know that Contador hasn't lost a stage race he's ridden in the last few years. It'll be hard but we'll try. Even this guy [Evans] is a threat."

Did you suffer to win the Giro?

IB: I really suffered. I think it was great Giro that everyone enjoyed. I think everyone who rode this year's Giro was aggressive right from the start. There was an attack after one kilometre on the first road stage in Holland. We did 50km/h for the first hour of most stages.

The stage to Montalcino shaped the general classification early on and then there was disaster of the L'Aquila stage. That created a lot of tension and interest for the race, to see how it would end. It was really hard every day. It was harder to chase and pull back time rather than lead the race."

Is this year's Giro better than last year's?

When you hugged your children on the podium, it marked the end of a difficult period for you. Have they rediscovered their father?

IB: They were very little when things happened. It's difficult to fully understand what they felt. Domitilla speaks to me with her eyes and I know today she was very happy. She remembers when she climbed on podium at the Tour.

In 2008, mid-way through my 'dark period', I watched the last stage of the Tour that Carlos Sastre won. I was happy for him and when Domitilla saw his kids go on the podium, I realised that she wanted to experience that again. I remembered that and so today was special to get off my bike and find my two children there waiting for me."

When will your next child be born?

IB: It will be born around Christmas or New Year. I found out on Saturday morning, the day of the stage of the Monte Grappa. The day after I went on the attack.

Who do you want to dedicate your Giro victory to?

IB: I've got to thank a lot of people. I'll call them one by one and explain how their support has been important for me. Some people were very supportive, so it's for my family, my team, my coach Aldo Sassi. Most people know what's he's going through. He's a fantastic person. I want to make a special thanks to all the people who have supported be through good and bad.

Felice Gimondi has said you should miss the Tour de France and savour this success. Do you agree? Why do you want to ride the Tour?

IB: I want to give back to the Tour what it's given to me. I love the Tour. I know what it gave me in between 2001 and 2005: some very intense emotions and I want to give them back.

I'll call Gimondi and ask his advice. You can train and programme everything but sometimes you have to listen to your emotions. I really want to ride the Tour. I've had the road book for a few months but I know that tomorrow I'll look at it and start thinking about the Tour.
Posted by Recovox at 10:32 AM

"There are some really strong riders out there. One is my teammate Vincenzo Nibali but there's also Alberto Contador, Andy Schleck, Contador, Robert Gesink and others I can't remember but don't want to forget."