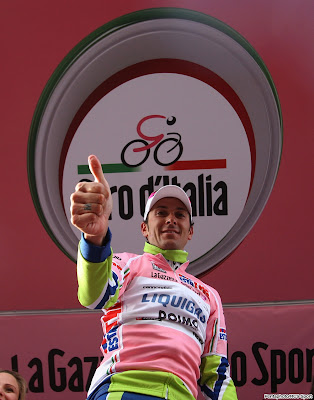 
"The race went well for me today. I just rode as steady as I could. Yesterday after helping Richie (Porte) to get back on in the climb to Livigno, I tried to take it easy on the Gavia to preserve myself for today. When I watched Wiggins at half way, I knew I had nothing to fear from him because he would never go faster than me downhill but later on I was really afraid of Pinotti. He was 12 seconds ahead of me at half way. But at the difference of many riders, I got better in the last couple of days in the Giro. I don’t know what it represents to win such a prestigious stage here. I’m just doing the one thing I’m good at," said Larsson.

In the overall rankings, Basso defended his lead, with David Arroyo (Caisse d'Epargne) holding on to second place, 1:51 down, and Vincenzo Nibali (Liquigas) third at 2:37. Michele Scarponi (Acqua & Sapone) had come into the stage only one second behind Nibali and had hoped to pass him for the final podium place, but lost time and finished fourth at 2:50.