Ivan Basso Back And Racing Clean! 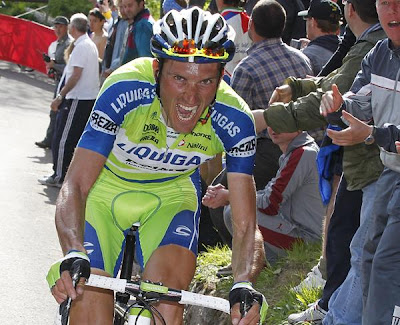 Italian Ivan Basso distanced himself from the murky world of doping after his impressive win on the Tour of Italy's epic 15th stage Sunday.

Basso, who rides for Liquigas, returned to competition in 2008 having served a lengthy ban for his implication in the 'Operation Puerto' drugs affair which erupted in Spain in 2006.

Since his return to the ranks the 2006 Tour of Italy winner has been steadily making an impact in some of the top races.

And while his impressive performance Sunday may have raised a few eyebrows among skeptics, Basso - considered one of the biggest talents of his generation - said he has nothing to hide.

"All the information regarding me, my blood values, the kilometres I've done in training, the climbs I've ridden, everything can be consulted," he told reporters after being asked if his victory was clean.

"I follow a rigorous line that has been set down by the team (Liquigas)."

Basso's winning ride, his first on the Giro since 2006, moved him into contention for the race's pink jersey.

Going in to Monday's rest day, the 32-year-old is 3min 33sec off the pace of unlikely champion David Arroyo of Spain, who has a lead of 2:35 on race rookie Richie Porte of Australia.

Basso admitted, however, that his years of cycling at the top might soon be under threat - from his own, equally impressive teammate Vincenzo Nibali.

"But time is catching up. The young guys who looked promising a few years ago are now becoming champions. Like the young gun (Nibali) who won yesterday and who is the Italian rider of the future."

Prior to the race Liquigas were dealt a blow when top contender Franco Pellizotti was excluded after the International Cycling Union (UCI) confirmed they had found irregularities in his biological passport.

Pellizotti, who finished third last year before second-placed compatriot Danilo Di Luca was excluded for two positive dope tests, is currently suspended from racing but has the backing of his team.

The biological passport, put in place at the start of the 2008 season, detects drug-taking by building an electronic haemocritic profile over a period of time and includes results of individual urine tests and also individual blood tests and highlighting abnormal variations.
Posted by Recovox at 4:53 PM