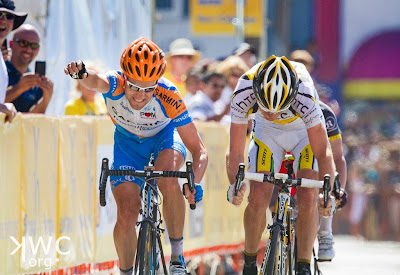 The battle for the general classification hit a fevered pitch on the road to Santa Cruz for the third stage of the Amgen Tour of California. David Zabriskie (Garmin-Transitions) pulled out a powerful stage win from a three-man general classification battle over Michael Rogers (HTC-Columbia) and defending champion Levi Leipheimer (Radioshack).

The climb up Bonny Doon Road was once again the launching pad for Leipheimer but this time Zabriskie and Rogers were ready to get on the Radioshack express. The three strong men built up a lead of 90 seconds at the top of the climb, but a large chasing group closed the gap to a dozen seconds over the next 25 kilometres to Santa Cruz.

The lead trio narrowly held off the chase largely due to the efforts of Zabriskie in the final kilometre. Behind, and capable of challenging for the general classification lead if he made the juncture, was best young rider and third overall Peter Sagan (Liquigas).

Sagan lost his team helper to a puncture in the run-in through Santa Cruz and had to be satisfied with taking the sprint for fourth.

Absent from the chase was the morning's leader Brett Lancaster (Cervelo TestTeam), and thanks to the 17 second gap which separated Sagan from the leaders, the overall lead passed on to Zabriskie, who also gained a 10 second time bonus on the line.

Rogers out-sprinted Leipheimer to claim the six second bonus, and now trails Zabriskie on the general classification ladder by four seconds, with the Radioshack man behind by six.

The Liquigas rider claimed the right to the points classification lead, tied on points with Mark Cavendish (HTC-Columbia) but in green thanks to his superior general classification position. He also kept his best young rider jersey with the finish, while Team Type 1 kept the mountains classification in the hands of Thomas Rabou thanks to the efforts of his team-mate Davide Frattini in the breakaway. 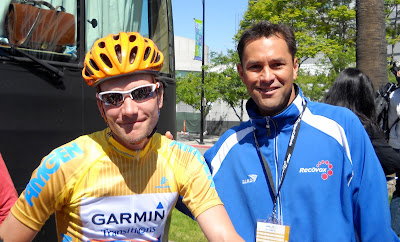