Mark Allen: Base Training: A Definition 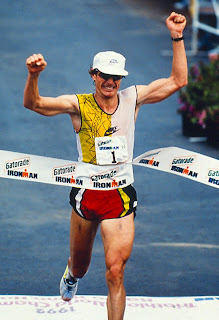 Base training is what will determine your racing results in endurance athletics. We've heard this over and over in magazines, blogs and articles. But what IS base training? Let me throw a concept out to you that defines what it develops: Maximum Lipid Power. What is that??? This is the speed or power output you can generate at the exact point where you are getting 50% of your energy needs for your effort from fat and 50% from carbohydrates. You may be saying that's wonderful, but still why is this so important? There are as few things that make this number gold for endurance athletics.

In a race you can burn around 700 calories per hour. If this corresponds to your maximum lipid power you will be burning 350 calories/hour of fat and 350 calories of carbs. Now, once again, why is this so important? Well, most people are able to ABSORB your 350 calories per hour worth of carbohydrate, which again if you are racing at their maximum lipid power output, you are going to be replacing carbs about as fast as you are burning them, which will spare the precious stored glycogen for a surge at the end. Once you start to accelerate or increase your output level beyond that point you also begin to burn higher and higher amounts of carbohydrate compared to fat, which will exceed the amount of carbs you can absorb per hour and at some point after burning through stored glycogen there is only one thing that can happen. You have to slow way down!

For most people, the maximum lipid power occurs at fairly easy to moderate levels ones that will be well below a race effort. However, if a person does indeed take the time to develop their body's ability to burn fat for fuel (base training), that speed or power output goes way up, which means that you use a higher percent of fat for fuel at ALL speeds even near max efforts in short races, which gives you a greater chance of absorbing enough carbs to sustain a high speed. This is not only a nice benefit, but in say an Ironman it is critical to prevent a suffering slow marathon, one where those 350 calories per hour that you can absorb do not cover the amount being burned for your efforts.

With correct base training the maximum lipid power will develop allowing a person to go faster and faster, to generate higher and higher power outputs coming from more efficient fat burning. And when that base gets combined with just the right amount of intensity training that level can become fast enough to be what you also race at in longer events, placing you in just the right kind of physiology to have it all, which is a speed that allows you to absorb enough carb to sustain an award winning effort!


For more, check out http://www.markallenonline.com/.
Posted by Recovox at 9:05 AM

These two players will be key to this team's success over the next few years as Asomugha is arguably one of the best corners in the league and Miller is quickly turning into the best option in the Raiders' passing game. Grace