Floyd Landis Interview: He's back, this time it's different 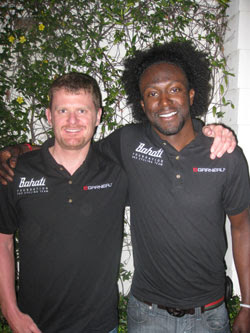 The past several years have been a roller coaster ride for American Floyd Landis, full of the sort of drama that could rival any daytime television writer. The Pennsylvania native was raised by a devout Mennonite family in Lancaster county, before letting his talent and passion for cycling take him to the sport's highest honor in 2006, as the overall winner of the Tour de France.

Landis defied all the odds in the Grande Boucle that year, riding in control of the race lead during the sixteenth stage until he cracked just 15 kilometers from the finish. He lost more than ten minutes to the stage winner of the day and plummeted down the standings to eleventh overall. He began stage seventeen with whispers in the peloton of a broken man, but a vicious display of teamwork at the base of the Col des Saissies by his Phonak team, the first major climb of five that day, saw his rivals dropped and Landis emerge with the longest time trial in modern Tour de France history at 125 kilometers.

His audacious move left him just 30 seconds behind race leader Oscar Pereiro, and he would overtake the Spaniard in the final time trial. Just four days later his team announced that Landis tested positive for an unusually high ratio of testosterone in the sample taken after his epic ride in stage seventeen. Landis' legal team mounted a defense citing inconsistencies in the handling and evaluation of his urine samples, but the disqualification was upheld and he was stripped of his Tour title. He continues to maintain his innocence.

This season he was expecting to ride for Michael Ball's Rock Racing team, but when the team couldn't secure a professional license he was on his own in the eleventh hour searching for a team. In a surprise move, Raashan Bahati's new Bahati Foundtation Pro Cycling team decided to bring Landis on board, and he's now gotten more of an opportunity than he'd expected - a way to channel his cycling into something truly positive again by helping underprivileged youth.

Landis talked to VeloNation about working with Bahati on his foundation, and the new partnership with his long-time supporter Dr. Brent Kay and the OUCH Sports Medical Center to help fund a youth track team.