Ivan Basso: “I want to win the Tour” 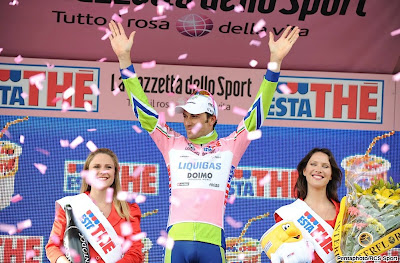 Ivan Basso (Liquigas-Doimo) returns to the Tour de France this year for the first time since being excluded before the start of the 2006 race after being implicated in Operacion Puerto. After winning the Giro d'Italia, the Italian now has the yellow jersey in his sights. Speaking to La Stampa, he made his aims clear: “I want to the win the Tour”.

“I feel the Tour in my heart. It seems like a cliché, I know, but it’s actually not like that, because my career began at the Tour”, the Varese-born rider said. “I can win the Tour with the desire and hunger for victory, and with the help of a team like the one that you saw at the Giro d’Italia.”

Basso hopes that Roman Kreuziger will fulfil the strong support role that Vincenzo Nibali did so well during the Giro. He has worked hard to build a strong rapport with the talented young Czech rider. “As soon as the Giro was over I went to train on the Col de la Madeleine with Kreuziger. We rode together and talked a lot. It’s fundamental to speak to one another. In a couple of year’s time, I will be helping Nibali and Kreuziger.”

As for his rivals for Tour de France yellow, Basso sees Alberto Contador as the outstanding favourite. “He is the best, he has already won all the stage races that count, the Giro, Vuelta and Tour. He’s very strong on the climbs, very strong in the time-trials. A champion like him is only born every fifty years, but that doesn’t mean that he’s unbeatable…”

Basso lists himself among the small group of contenders waiting to take advantage if Contador slips up, namely the Schleck brothers, Cadel Evans, Denis Mencov and, of course, Lance Armstrong. The influence of Armstrong’s example on Basso’s mindset and preparation has always been apparent, and his admiration for the Texan is palpable. “Only somebody like him could finish on the podium of the Tour at 38 years of age. I am Lance’s fan, colleague, adversary and friend”.

Basso was somewhat less effusive, however, when asked about the Tours he missed due to his suspension for what La Stampa diplomatically referred to as being “close” to certain “infamous” doctors. He prefered to focus on the future. “By reaching the Arena in Verona with the pink jersey, I closed the door on my two years of solitude, the most difficult period of my life. I put an end to a story and began to write another.” As for cycling’s problems at large, Basso would only say that “there are problems in every family, but I really couldn’t say what I don’t like [in cycling today].”

Basso was excluded from the 2006 Tour de France and dropped by his CSC team for his involvement in Operacion Puerto. He initially protested his innocence and signed for Discovery Channel for the 2007 season, before finally admitting to having “attempted doping” under the supervision of Dr. Eufemiano Fuentes. He served a backdated suspension that expired in October 2008.

After winning the Giro d'Italia, Basso is now focused on the mountain stages of this year’s Tour, where he believes he can repeat his feats from the Giro. “This Tour has more climbs (than usual) and the time-trial on the penultimate day might not be decisive. If I want to beat Contador, the opportunities are in the Alps and the Pyrenees. I’m praying that I can repeat the magic of the Zoncolan (stage 15 of the Giro), when 3km from the finish I felt a click, something moved inside of me and I went away from Evans”.

As Italy looks for a repeat of Marco Pantani's Giro-Tour double of 1998, Basso is clearly warming to the task. “From this moment onwards, only the Tour exists for me,” he said.
Posted by Recovox at 9:13 AM