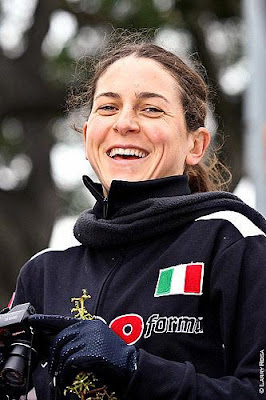 Recovox knew Kristy well. She was an amazing person. Our heart goes out to all the friends and families of Kristy and Matt. The following article appeared in the SF Chronicle today.

San Leandro -- Kristianna "Kristy" Gough was a champion triathlete who had been training exclusively as a bicyclist in recent months and, according to her friends, winning just about every road race she entered. When she was fatally struck Sunday, she and two companions were at the front of a pack of cyclists on a training ride in preparation for another race next weekend.

"I've never seen her so enthusiastic as in the last couple of months," said Clas Björling, a champion Swedish triathlete who was Gough's longtime sweetheart. "She was a really talented athlete, especially on the bike. She was so strong physically and mentally."

A friend and fellow cyclist, Matt Willinger, said Gough had hit her stride as a cyclist and was working with a pair of trainers from Belarus.

"They were ecstatic about her progress and what they thought she would do in cycling," said Willinger, who works with the same trainers. "She wanted to pursue Ironman triathlons. They had different plans for her. They wanted her to go to the Olympics and to world championships for cycling.... She was on her way to something great."

Gough, who grew up in San Leandro, had been a swimmer and ran cross-country at the Madeira School, a boarding school in Virginia, friends said. But it wasn't until she got to Chabot College in Hayward, where she and Willinger met, that she became passionate about triathlons.

"She just felt free," said Willinger. "When you're working at your peak, you don't have to think about anything else. It's very liberating."

As an amateur triathlete, Gough won in her age group in the 2004 Ironman Hawaii triathlon.

"That's the world championship; the biggest you can win as an amateur," said Björling by telephone from his home in Sweden.
Her biggest achievement as a professional triathlete was finishing third in the Ironman in the United Kingdom in 2006.
Friends described Gough as quiet and introspective, even a bit tough on the outside, but full of warmth and with a wicked sense of humor she shared with those who got to know her.

Tanya Grossman, another longtime friend, met Gough almost dozen years ago when Gough started training with a group of athletes connected with a triathlon shop owned by Grossman's husband.

"She was just this young girl who was fast and kicked everyone's butt," said Grossman. "The guys didn't like it. She was faster than most of them."

Grossman persuaded Gough to join her at a training camp in New Zealand in 2004, and the two biked and ran and swam and traveled around the country.

"You know you're good friends with someone when you can share a room and sometimes a bed with them for three months and still like them at the end," said Grossman.

Then, choking up, she added: "She has grown into a woman with such depth. I wasn't done with her yet as a friend."
It was in New Zealand that Gough met Björling. The couple trained together and divided their time between the Bay Area and Sweden, where they cycled almost 250 miles across the country.

The couple last saw each other a year ago, before Björling returned home to Sweden to take care of a serious health problem, but their relationship had only deepened over the telephone in recent months, he said.

Gough's outlook on life was shaped in part by a childhood that included divorced parents and a lot of moving around, said Björling.

"When I met her, she already knew what was important in life: take it day by day. Don't spend too much energy on details, but try to see the big picture," he said. "As we see today, life can change in a second, so why make long term plans?"
Posted by Recovox at 10:24 AM