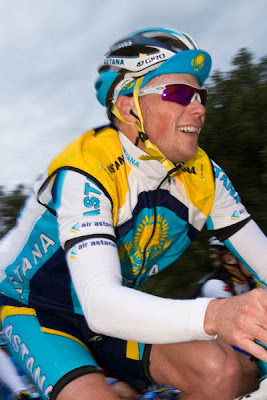 Strong winds played a factor in the 50-lap event when a nine-rider break split off the front of the peloton. Horner's well-seasoned fitness and diesel-like engine arguably had the most significant effect on the break's consistent 40 second separation from the field.

The break looked to be working well together, holding a sizeable lead over a field chase led by Rock Racing and California Giant Berry Farms. After the third prime Horner recognized some riders not working as hard and threw down one final attack that shattered the break, taking with him Borrajo and Jacques-Maynes.

"I know the other two riders were very strong, but it was no problem for me to rotate through with them in our break," said Borrajo, regarding the time trailing ability of both Jacques-Maynes and Horner. "Maybe in a time trail they are stronger but in this type of race in a break away there were no problems because in Argentina the races are always flat and windy with breakaways - I'm used to that."

The three riders continued to round the course gaining ground on the field and once in sight, Horner used his efforts to close the gap despite the opposition from Borrajo and Jacques-Maynes, who felt that a bunch sprint would be too dangerous. "I wanted to lap the group because I love the chaos of a sprint, maybe not when I'm on the same lap as everyone but when I'm one lap up on everyone it's nice because all I have to do is follow a good sprinter," said Horner.

"Both guys were sitting on me for two full laps until I closed the gap to the field with three laps to go," he added. "It took me a lot of energy to do that and it took a lot of energy to get back up to the front, but I wanted that kind of comfortable chaos. I knew if I went head-to-head with Borrajo he was going to win in a clean sprint like that. Maybe if we were mixed up in the field, with chaos and bumping, I'd have a better chance at winning."