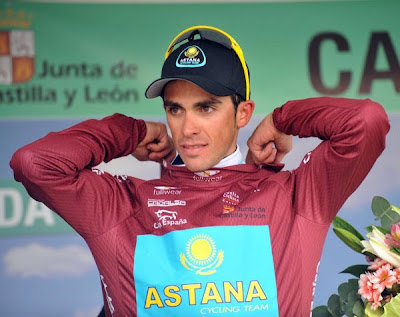 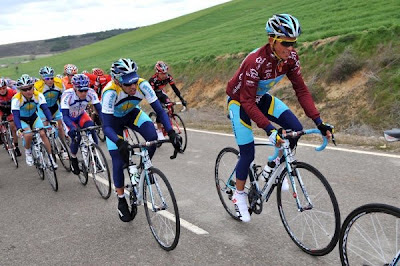 On stage three of the 23rd Vuelta a Castilla y Leon Team Astana continued the pace-making required to protect the race lead of Alberto Contador. Despite the rain and wind ever-present on the stage the team did a perfect job of delivering Contador safely to the finish line to retain the burgundy leader's jersey which he has worn since his stage win in the opening time trial on Monday.

After more than two hours of racing a break of three was finally established and attained a small gap over the Astana-led peloton. Hoping for more cooperation from the weather to hold off the peloton, the trio up front worked well together and drove toward the finish but were reabsorbed by the group with less than 10km to go, setting up the finish for a traditional mass sprint.

As the teams of the sprinters moved forward, Team Astana was able to ease off the gas and let the lead-out work fall to others. Approaching the line with the riders spread wide across the road on the slightly uphill kicker Francisco "Paco" Ventoso (Andalucia) came roaring around Euskaltel-Euskadi rider Sammy Sanchez to secure the victory by at least five bike lengths. In third place was Edgar Pinto (Benfica).

There was no change at the top of the general classification as Contador accepted his third leader's jersey on the podium and teammate Levi Leipheimer remained in second place. Once again setting aside his trophy and flowers the slight Spaniard moved forward on the stage and plainly pointed to the team name 'Astana' emblazoned on the jersey in what is becoming his signature gesture on his many visits to the winner's circle.

Thursday's Queen Stage has the peloton riding from Carrión de los Condes to Montaña Palentina in a mountain stage with a challenging uphill finish. It could be the perfect time for Alberto to secure the win in this year's race.