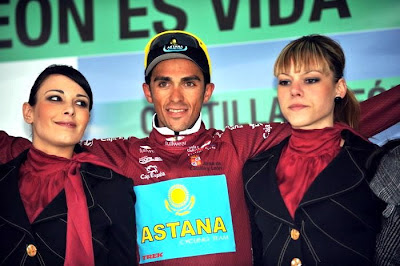 Astana's Alberto Contador successfully defended his overall title at the 23rd Vuelta a Castilla y León on Friday, cruising to the win behind the final stage's bunch sprint finish, which was won by Koldo Fernandez (Euskaltel-Euskadi). The 2007 Tour de France champion never once relinquished the leader's jersey after taking the opening time trial on Monday by four seconds over team-mate Levi Leipheimer, then extending his lead on the penultimate stage's mountain top finish.

Contador took the time to dispel any rumours that he might move to another team to participate in the Tour de France, giving thanks to his Astana team and pledging his loyalty. "Without them, it would have been impossible," Contador remarked of this week's victory. "I may have been the best in the time trial and in the queen stage, [but] without the support of my team, it would have been impossible to control the race.

"It must be clear: I will not ride the Tour the France in another team than this one," Contador insisted. "I hope there comes an end now to all speculations and rumours that I will go to another team in order to participate to the Tour the France. I will stay with my friends and sponsors who have stood behind me. This week, we proved again that Astana Cycling Team is not only a strong team, but a group of friends as well."
Posted by Recovox at 6:21 PM