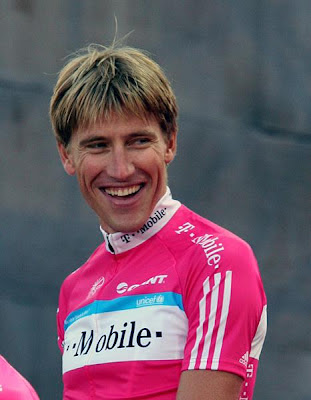 Rock Racing has continued to make headlines within the cycling media following its turbulent Tour of California. The team's high-profile acquisition of Mario Cipollini ended last week after disagreements with owner Michael Ball. Following the news that Cipollini will not become a manager are rumors that another former professional, Axel Merckx, is in talks with Ball to become the team's new manager.

"I have been in contact for sure, and we are it is at the beginning stages, but it is too early to say anything more," Merckx told Cyclingnews. "It's a new team and obviously they don't have a lot of experience in the cycling world, but there are a lot of opportunities for them. Bringing the right people into the right spots would be a great opportunity. Not just for me but for the cycling community."

Merckx said he is fully aware about the controversies surrounding the team and its owner, and that he considers Ball a positive influence on the sport. "I know he has a strong personality but I don't think it is a bad thing for cycling," he said. "I have read a lot of things and I don't want to judge based on things from the past. He is a nice person. I have talked to him and he is a great guy."

"Cycling needs that right now and he wants to stay around for a while. He is young in the cycling world, he wants to do it his way, and I think it is very refreshing for cycling. We have to see in the future if it will continue but I am convinced that this is the way cycling should go and he is the right thing to do."

As for his own thoughts on directing, particularly this team, Merckx thinks being recently retired will be his strongest asset. "Everyone knows I've been in cycling for a while. I have a lot of experience and a freshly retired cyclist, so I think like the cyclists do. I am pretty ambitious and want to help younger cyclists. It is an interesting challenge for sure, it's a team that wants to grow a different image for cycling. I think it is a good opportunity for cycling to bring a nice new image to cycling."

The former Belgian national road champion and Olympic bronze medalist retired from professional racing last year at the age of 34, settled in British Columbia, Canada with his wife and started a bicycle touring company with trips to Europe. Merckx said his higher goal is to help younger racers in North American develop and make the jump to European racing -- that running a domestic team would allow him to fulfil that. He said that both his company and the team are relatively new ventures, so it is difficult to see far down the road with either.

"It is also in the beginning stages so it's a young company also," he said of his company Axel Merckx Bicycle Tours. "We just started it in the last few months so now I have to make a decision which way I want to focus myself. I know I want to be in the cycling community, especially in the North American community in order to bring young riders over to Europe. I am committed to making something work now whether it is through my company or with a team. It could go both ways but I definitely want to bring along the younger racing here in North America."
Posted by Recovox at 6:03 PM