Rock Racing's Peña Rockets Into Top 10 Overall - Surly At Full Strength They Would Have Been The Team To Beat In 2008? 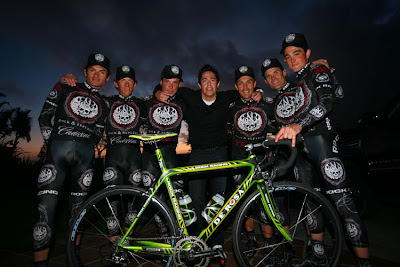 Rock Racing’s Victor Hugo Peña sent a clear message Wednesday that he is a threat to contend for a strong overall finish at the Amgen Tour of California.

Peña was one of only five riders in the lead group as the race crossed its highest point, the 4,100-foot summit of Mount Hamilton, midway through Stage 3. The Colombian would go on to finish among a group of 15 riders who were 19 seconds behind stage winner Robert Gesink (Rabobank) and runner-up Levi Leipheimer (Astana).

Peña’s impressive performance in 102.7-mile (165.3 km) race from Modesto to San Jose moved him up 23 places in the overall standings to 10th place, 31 seconds behind Leipheimer, the new overall race leader and defending champion of the Tour of California.

Rock Racing Team Owner Michael Ball said seeing Peña race wheel-to-wheel with the best at the head of the peloton – on the toughest stage to date – was both satisfying and a disappointment.

“We came here to make the moves and win stages,” Ball said. “Like Mario Cipollini’s podium finish yesterday, Victor’s ride today proved that Rock Racing has top talent,” Ball said. “At the same time, this stage played to the strengths of our three riders who were not allowed to compete in this race: Tyler Hamilton, Santiago Botero and Oscar Sevilla.”

Peña, whose impressive credentials include wearing the yellow leader’s jersey for three stages of the 2003 Tour de France and winning an individual time trial stage in the Giro d’Italia, agreed with Ball’s assessment of the talented trio who are unable to compete in the most prestigious race in the United States.

“The only thing I can say is that at training camp, they were better than me,” Peña said. “Santiago and Oscar were much better than me. Tyler was always with me. So I think those three guys would have been good contenders for Levi.”

On a stage when only 16 of 120 riders in the race finished within four minutes of the winner, Peña said he felt comfortable on the day’s five categorized climbs. His performance, he said, made him recall the years he spent shepherding Lance Armstrong to several Tour de France victories when both were riding on the U.S. Postal Service team.

“Mt. Hamilton was a steep climb,” he said. “It reminded me of some of the steeper climbs in Colombia. In Colombia, we have long climbs, but not so steep as Hamilton.”