The Return Of The Lion King 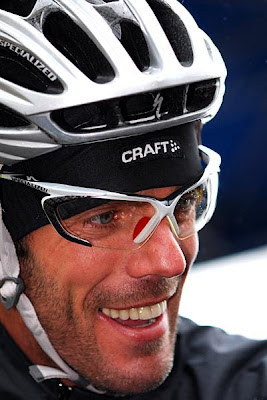 Conquering several obstacles that had to do with contracts and licenses finally allowed 2002 World Champion Mario Cipollini the passage to stand on the start line of the 2008 Tour of California. Three years into his retirement, the cycling world thought that the opportunity to watch a sprint involving the flashy Italian demolishing his competitors by several bike lengths was over. While he did not beat his rivals Tom Boonen or Heinrich Haussler, taking third place against the world's fastest young talents was considered a victory in its own right.

Cipollini's nearly two hundred race wins caught the attention of Rock and Republic owner, Michael Ball, and the pair entered into negotiations at a Las Vegas disco during Interbike in the fall of 2007. Conversation became official with paper work prior to the start of the Tour of California. According to Cipollini, he and Ball agreed that he would compete in the top ranked criteriums that the US is so recognised for. However, one thing led to another and the team asked that he start the Tour of California.

"I thought he [Ball] was just another crazy person like all the others that I have met in my career," joked Cipollini regarding their initial informal discussions in Las Vegas. "At the time in the club there were a lot of beautiful women and I was more interested in them than in what Michael Ball had to say.

"But Michael was putting on more pressure on me and we decided to meet again," continued Cipollini, who took interest in Ball's team upon realizing the offer was a serious one. "Everything started from that point and everything was based on the idea that Michael Ball was going to create a high profile team by using my experience.

"I'm forty-one years old so basically it is not a profession for me anymore, it's just my passion," said Cipollini in a post-race press conference. "Just sprinting here with riders that could by my kids is a victory – I'm very proud. I like to challenge myself with something that is almost impossible to accomplish. It is just a challenge against myself. Although it makes me sad to take away the space for the young riders, from an egotistical point of view, I like the challenge and for me it is very good."

According to the 'Lion King' his winter seems to be paying off and even if the jetlag from arriving two days before the start of the race is still sitting in his legs now, he plans on improving his performance from third to first place in a bunch sprint in time for the Pasadena finale.

Cipollini's sprint technique historically required an entourage style of lead-out train, delivering him to the two hundred metres to go mark. While racing in the USA may not require the extensive congregation to team-mates lined up at the front of the peloton, events like the Tour of California have attracted some of the fastest sprinters in the world, backed up by the horse power of their ProTour team-mates. "The big challenge right now is not having a team that can help me in the finish," said Cipollini regarding his under-manned lead-out train. "So I have to do things on my own and invent a new way to win. I believe that the technique of having a train is very important in a sprint."

Stage two winner and also former world champion, Belgian Tom Boonen, paid respect to the return of the patriarch sprinter, complimenting his tactical expertise and athleticism that has not changed since his retirement in mid-2005. "Cipo is a good rider," said Boonen. "If you look at him he's a good athlete, he always was, so why shouldn't he be good now? He has a lot of experience and he doesn't need to be the best guy to win a sprint, and he's compatible to win a sprint here and right now. Everything has to be going fine because he doesn't have the big legs from the best days, but I'm sure it's possible for him to win a stage.

"I would be honoured to lose to him," continued Boonen with respect to Cipollini's age. "It doesn't change anything that he is forty-one years old. Age is only what you make of it. He's a well-trained athlete and he is still Mario Cipollini. I know the first time I beat him I was very proud of myself and then the day after he beat me again. So, just because you beat him once doesn't mean you are going to beat him everyday. He's been doing this a long time and he has way more experience than I do."
Posted by Recovox at 8:29 AM