Contador: No 'Plan B' — he wants the Tour 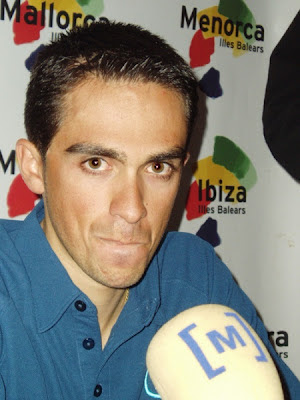 Alberto Contador never dreamed he would win the Tour de France last year. But he did, thanks in part to Michael Rasmussen’s tangle of lies, and now the Spanish climber is intent on proving to the world that he’s a worthy champion.

But there are dark clouds on the horizon in Contador’s otherwise-sunny post-Tour world — the possibility that Tour organizers might follow the lead taken by the Giro d’Italia and leave Astana sitting on the sidelines.

Contador, 25, simply says that he cannot imagine being left out of the Tour.

Doing his best to disarm the doubters, Contador faced the Spanish press Sunday evening ahead of his season debut in the Mallorca Challenge. Here are excerpts from the press conference:

Question: How do you face the prospect that you might not go to the Tour?

Alberto Contador: I don’t want to consider this option. The Tour is the race that defined me as a racer. I want to go back and I don’t even want to think about not going.

Q: Before people were asking about how many Tours you might win; now people are wondering if you will even be allowed to race this year. Does that rattle you?

AC: Cycling is living some crazy days right now. It’s what I do for a living and I must live with it right now. As I said, I am not considering any other option. All my season is focusing on the Tour. I want to try to win again. I am an attacking rider. I want to race the Tour like last year, attacking on the mountains and taking back time against the time-trial specialists. This is what I am focusing on.


Q: Can you accept the idea that you might not go to the Tour?

AC: No – at the moment I cannot imagine not going to the Tour. The (Astana) team is completely new – new staff, new directors, new riders – the only thing that has stayed the same is the sponsor. It was bad that we were left out of the Giro because a lot of riders (on Astana) were preparing to make the race. The Giro is very important for the team.

Q: One concern about the Tour is that it dips into Italy and that CONI might disrupt the race to make questions about Operación Puerto. Are you concerned about this?

AC: I’ve had no sort of notification. Like I said before, I am always at the disposition to help the authorities in any way I can. If they want to make any type of questions, they can contact me at any time.

Q: Did you consider the risk that Astana might have problems when you signed with the team last fall?

Q: It was reported that you have a “Plan B” if you don’t get invited to the Tour?

Q: How has the Tour win changed your life?

AC: It’s different for me now. Before no one knew me when I was walking around. Now when I walk down the street, people recognize me and call out my name. What’s most beautiful is that the people of my city are really in love with cycling now.

Q: Did you dream that you would win the Tour last year when you began the 2007 season?

Q: Does cycling’s bad ambiance sour your Tour victory in any way?

AC: No. For me, the Tour victory is still the greatest thing. It is very good for me right now. Cycling is living a crazy moment right now and that’s just the way it is. Some say it was better 10 years ago or when Merckx was riding, I can’t say. What’s important is that I won the Tour.

Q: Do you feel like a legitimate winner after what happened to Rasmussen?

Of course I do, yes. I have never thought otherwise.

Q: Have you had any contact with Michael Rasmussen? Do you know what he’s doing?

Q: What’s your view of the biological passport?

AC: I am in favor of these steps. If it’s something that can help with the image of cycling, then I am all for it. We can only hope that they respect the riders.

Q: Do you feel like you are a spokesman to help cycling move into the future?

AC: I am conscious that we are entering a new era. I have to give all that I can. If my image can help change the idea of what cycling is, then that’s great. I don’t know if that role specifically corresponds to me. I am aware of this responsibility.

Q: How do you feel that cycling is seemingly constantly under attack?

AC: It’s a pity. It seems that every time they speak of cycling, there is bad news. It’s always being attacked. It’s sad that they do not speak more about the sporting aspects.

Q: Do you feel persecuted?

Q: What motivates you most this season?

Q: The team is working with (anti-doping expert) Rasmus Damsgaard with internal testing for surprise anti-doping controls. What do you think about this and how many times have you been tested?

AC: I have had three controls already. I’m in favor of this effort. This, along with the biological passport, are important steps for cycling. This will help with the credibility of the sport. This is also another example of how the team has changed from last year. We are totally at the disposal of the controllers. They can test us whenever they want. This will help clear up the idea that the team is different.

Q: How has your perspective toward racing changed from last year?

AC: At this point last year, I was new to Discovery Channel. I was just finding my place on the team. I was very excited to be racing again. I had immediate, short-term goals, like Paris-Nice. The idea that the Tour was there was another big goal, but the short-term goals were more pressing at this time last year. This year, everything is about the Tour.

Q: Considering your schedule, will you have pressure to win early?

AC: I am in no obligation to win any of my early season races, but of course I want to do well. My personal preference is always to try to race to win. That’s the way I’ve always been. I cannot see that changing too much. What will change, of course, is that the Tour is the season focus and I will aim to reach my peak in July.

Q: How are things on the team?

AC: It’s great. There are a lot of familiar faces from last year. I feel like I am at home. I am very content. It’s more or less the same team, just the name on the jersey has changed.

Q: Are you worried about the team hierarchy with yourself, Levi Leipheimer and Andreas Klöden all on the same team?

AC: People have been asking this a lot. Last year with Levi, he was third and we never had a problem in the 21 days of the race. I cannot imagine there will be a problem with Klöden. We are all professional and we will all be working toward the same goal. We will work together and then band together behind the strongest one. We communicate in English.

Q: Who do you work with in preparation?

AC: The same as last year. I am working with the trainer on the team (Pepe Martí) and now I am working closely with Alain Gallopin.

Q: What kind of changes have you made in training?

AC: I am working very hard on the time trial. Another thing I learned last year is that I have to become more consistent in the higher cols. I’ve been working very hard to improve my depth of strength and, from rides this year, I can already notice the difference.

Q: How important is it to improve in the time trial?

Q: Will you try to go to the Olympics?

Q: What’s your racing schedule for the year?