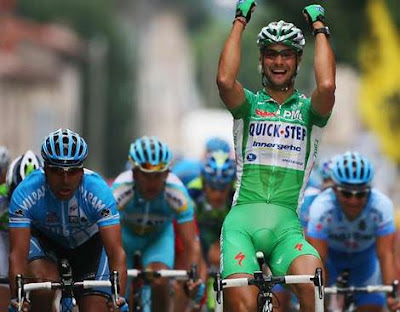 The 27-year-old said he’d be happy with a stage victory or two in his California adventure, because from here to April, it’s all about the spring classics.

“I wanted to race in California to do something different. Every year for the last five years I’ve done the same races. That’s not why I started racing to always do the same races year after year,” Boonen told VeloNews in a break last week in Qatar. “California sounds good. Last year, (Paolo) Bettini went to check it out. He told me it was good racing, good organization, good hotels.”

Boonen and Co. will fly to California on Sunday and spend the rest of the week recovering from the long trip and scouting out some of the key stages during training rides.

Boonen’s charismatic presence at the third California tour is sure to be one of the top draws for fans and journalists.

It’s not the first time Boonen has raced in the United States. He hit American shores as an amateur and again as a first-year pro with U.S. Postal Service in 2002, racing in the Redlands Classic and Sea Otter as well as Philly week.