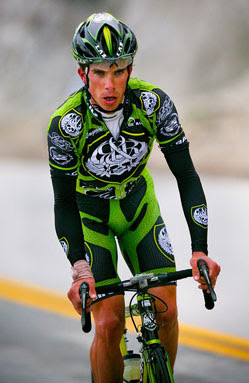 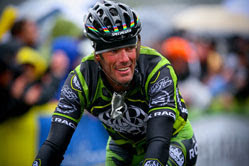 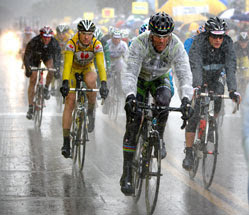 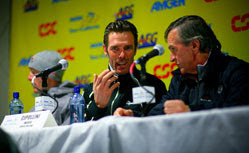 Attacking from the start of the 93-mile (150 km) stage, Creed played an instrumental role in a pair of breakaways that stayed clear of the peloton on a rain-soaked, bone-chilling ride from Santa Clarita to Pasadena. Aggressive to the end, Rock Racing nearly scored its second podium finish of the race when Creed attacked inside the final mile and finished fourth in a five-up sprint in front of the Rose Bowl.

“It was the last day and I didn’t want to end the week without having done anything,” Creed said. “At the very end, it was like throwing a ‘Hail Mary’ to try and pull out the win.”

In all, Rock Racing scored seven top 10 finishes during the race, including Mario Cipollini’s third place finish in Sacramento on Stage 2. Even more impressive was the fortitude of Rock Racing in an event that saw only 77 riders of 132 starters finish the 650-mile race.

Rock Racing was one of only three teams – and the only non-ProTour team to complete the race with its full squad. But unlike the CSC and Rabobank squads, Rock Racing began the race with only five riders (instead of eight) after race organizer AEG declared that three of its riders– American Tyler Hamilton, Colombian Santiago Botero and Oscar Sevilla – would not be able to start.

“These guys came together in such adverse conditions that just them surviving day-to-day from a mental perspective is something to be commended,” Rock Racing Team Owner Michael Ball said. “This team is a real team. These guys are truly friends who work with each other and who just want to go out there and race and compete. The fact that they didn’t let every member of the team compete here is a tragedy.”

Rodriguez’s finish was particularly impressive considering he was badly hurt in a crash during the final miles of Saturday’s stage. He needed crutches just to walk from the team car to his bicycle to start Sunday.

“Basically, I could ride a bike, but I couldn’t walk,” Rodriguez said. “As the race went on, things started loosening up and I felt a little better. Then the weather came and I crashed again. I thought that was it at that point. But even though my morale was down, I pressed on and it basically become a battle of survival."