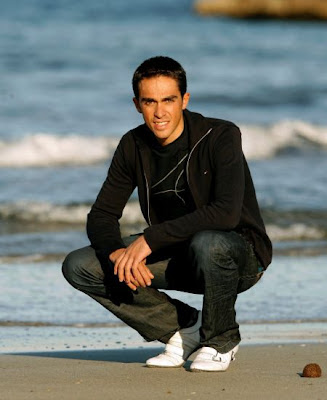 Tour de France champion Alberto Contador will look to continue venting his frustration on the bike when he saddles up for the five-day Tour of the Valencia Community on Tuesday.

The Spaniard and his Astana team are still digesting the bitter pill of being left out of the Tour de France, and the Giro d'Italia due to controversial decisions by the respective race organizers.

Astana, which has new management and a new anti-doping philosophy nine months after its eviction from the Tour after Alexander Vinokourov's positive blood doping test, is determined to show it deserves to feature in the world's biggest bike race.

However, Contador already seems resigned to missing out on trying to defend his yellow jersey this year, and is looking ahead to 2009.

"I'm really optimistic and I'm sure they will change their mind. We (Astana) are a model team and have nothing to do with last year's team," the Spaniard told EFE radio.

"I am not talking about this year, because that situation is still too complicated, but next year."

Contador's rivals are likely to witness a strong performance from the Spanish climber during this week's five stages, beginning with the two-climb, 157km stretch from Sagunto to Port de Sagunto on Tuesday.

Contador will be joined in the race by fellow Spaniard Oscar Pereiro, who was crowned the 2006 Tour de France champion last year after American Floyd Landis was finally disqualified for doping.

Lampre's former Giro winner Damiano Cunego will also be in attendance, while Milram will be hoping its star speedsters, Italian Alessandro Petacchi and German Erik Zabel, can take out some sprints.
Posted by Recovox at 4:40 PM