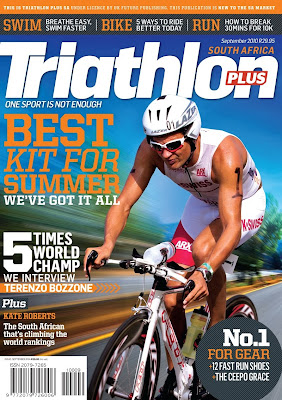 Terenzo Bozzone - once south african, now kiwi has burnt up the 70.3 circuit this season, which at last count stood at four wins and five second places out of 9 races. He won the World title back in 2008 and has recently been carving up a storm in the pro ranks. Another simple reason we’re featuring this guy is that he’s a born and bred South African, and originally hails from Johannesburg.

I was fortunate enough to train with Terenzo and his training partner, ace IM specialist Kieron Doe whilst I lived in New Zealand. They lived just down the road from me and we shared quite a few six hour rides in the Waitakere Mountain Ranges, where they do most of their base training, before heading off to conquer the world. I chatted to him about life and triathlon and this is what he had to tell us.

I have heard you left South Africa when you were about eight or nine years old - I know it’s not a major part of your life, but it’s good to know that a world champion originally comes from these shores!

I was born in Johannesburg in 1985 and lived there until I was 10 years old. I went to Emmerentia Primary and represented Gauteng in national swimming. I also represented South Africa at the Karate World Champs in the early 1990’s.

Tell us how you found your passion for Triathlons.

When I was 13 and living in New Zealand I was wakeboarding behind a boat, tried to do a flip and landed on my head, bursting an ear drum. I had several operations on my ear and was forced out of the water for a few months. That is when I was introduced to Duathlons and I was hooked!

Is your core focus on the long-distance races? No more Olympics?

The longer stuff is more appealing to me at the moment. I am really enjoying the lifestyle and the people I meet while training and racing for the non-drafting races. Ironman is where my focus is heading, but the half distance races work really well with my training in the middle part of the year, along with the occasional non-drafting Olympic distance race.

At the moment, you’re kicking major butt almost weekly in half Ironman events. What’s your secret to such consistency?

Shhhh! It’s a secret! I really like the distance and I think the training for the Ironman stuff has given me a great base that allows me to recover quicker and race more consistently. The thing with the Half Ironman’s is that if you race your race, you will determine the outcome. To a large extent it doesn’t matter what your opponents are doing.

New Zealand is a small country with a relatively small triathlon community. How is it that they produce such good triathletes? I lived amongst you for a while but I’m still trying to figure it out!

If you had lived there long enough we would have shown you the special watering hole…I guess the small community makes us all try harder to stand out amongst the others. Hamish, Bevan, Kris and Brownie have all done great things recently, but the history in the country goes back way further than us. The terrain is perfect for all types of training and we have people who have pioneered the principles of training - like Arthur Lydiard.

Ironman New Zealand – when are you going to knock Cameron off that top spot? It’s close, right?

Good old Brownie. I just wish he could pull out those performances in Kona. He really does step up his game down in Taupo on the IMNZ course. I think I have learnt a lot the past couple years, and my limits have increased substantially. I can hopefully make the race a little closer next year and who knows, if things go my way I may be able to prevent Cameron’s goal of winning 10 in a row.

The Waitakere Mountain Range – it’s a fantastic place to ride and train, and I know you rate it highly – tell us a bit about it.

The good old Waitakeres! The place where legends are made - Peter Snell and all those guys did their long runs in the ranges, and I have often spent weeks on end riding out there, accumulating thousands of meters of climbing. The scenery is great and the roads are reasonably quiet. I just hate it when they do road works out there - they put a bit of tar down, then sprinkle stones on top of it and hope they stick. It takes a few weeks for the loose stones to get off the road.

Is there anything we don’t know about Terenzo Bozzone the triathlete? Something apart from sport, for instance, I know you like to party?

Party – who me? I like my sleep too much! I love living life on the edge. When I have a flight I make sure I don’t arrive at the airport one minute earlier than I have to - this goes for transition on race mornings too. I like every aspect of my life to be competitive, but don’t like it when I lose or don’t achieve my goals - especially the goal of not having to pay for my bike at airports in America. I also enjoy posting tweets while I race. You can find me on: "www.twitter.com/terenzo1.

I am an awesome chef, like “Jamie Oliver” awesome… but it only happens every leap year though.

We certainly have the talent in this country. We need to catch them early on and develop them like all these other countries do - and then we could also have future World and Olympic Triathlon Champions living and training in South Africa, competing under our banner...something our younger triathletes can take heed of, and hopefully aspire to.

- Article Courtesy of Glen Gore – Editor, Triathlon Plus South Africa.
Posted by Recovox at 11:26 AM