Eating practices of the best endurance athletes in the world 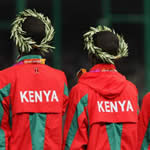 It's strange, but true: The nutritional practices of the best endurance athletes in the world have not been carefully studied.

Those "best endurance athletes" are clearly the Kenyan runners. Attempting to verify this fact for you is probably unnecessary, but it can at least be noted that one study found that athletes from just one collection of Kenyans, the Kalenjin tribe, had won approximately 40 percent of all major international middle- and long-distance running competitions in the 10-year period from 1987 to 1997.

In addition, approximately half of all of the male athletes in the world who have ever run the 10K in less than 27 minutes hail from Kenya. When they're allowed to enter freely, Kenyan athletes dominate road races around the world.

And yet, until now the eating habits of the top-level Kenyan runners haven't been examined in a scientific way, even though the Kenyans' nutritional practices must assuredly represent a key reason for their running success. The person who argues that "If only the Kenyans would eat differently, they could run much faster," would be on flimsy ground. The Kenyans are doing things right when they sit down at the dinner table, or they wouldn't dominate international competitions.

But what is it exactly that they're doing? Are they Zone dieters, followers of the Perricone Promise, adherents of the Atkins Diet, or do they focus on the South Beach eating plan? Do they eat lots of "discredited" carbs or large ladles of lipids? From what foods do they get their seemingly limitless energy for running?

To answer these questions, Yannis Pitsiladis of the International Centre for East African Running Science in Glasgow, Scotland, along with Mike Boit (the Olympic bronze-medal winner from the 1972 Games), Vincent Onywera, and Festus Kiplamai from the Exercise and Sports Science Department at Kenyatta University in Nairobi and the Department of Foods, Nutrition and Dietetics at Egerton University in Njoro, Kenya, recently monitored everything that went into the mouths of 10 elite Kenyan runners over a seven-day period at a training camp near Kaptagat, Kenya.2

This group of Kenyan athletes was truly top-level, including several Olympic medalists and also first-place finishers from the Paris and Athens World Championships.

All 10 runners belonged to the Kalenjin tribe, with five from the Nandi sub-tribe, three from the Keiyo grouping, one Tugen individual, and a Sabaot. Two of the athletes specialized in 1,500-meter running, while the other eight were training for eight- and 12-K cross-country competitions.

The average age of the Kenyans was 21, and mean height was 1.75 meters (~5' 9"), with remarkably little variation in stature (the shortest individual was 1.70 meters, the tallest 1.80 meters, which meant that the smallest and greatest heights were just three percent away from the mean).

As you might expect, the Kenyans were lean, with body weight averaging ~58.6 kilograms (129 pounds) and body fat ranging from about six to 10 percent.