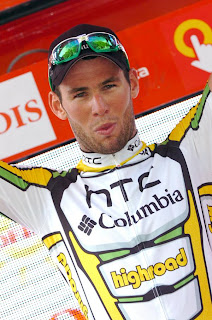 Mark Cavendish (HTC-Columbia) has stated that the world championships circuit is more difficult than he had previously anticipated. The Manxman tested the course over the weekend and admitted that he may have to lower his expectations significantly ahead of next Sunday’s road race.

“The course is certainly too difficult for me,” Cavendish told RTBF. “I hadn’t seen the circuit myself before now.

“According to what people had been telling me beforehand the rainbow jersey was a possibility, but now that I’ve been able to check it out for myself, I’ll have to revise my ambitions.”

Cavendish had been bullish about his chances up until the weekend, telling the Sunday Independent, "I'm not going into it thinking 'I'm going to win this'... but there's a chance.”

The sprinter arrives in Australia after a fine Vuelta a España, where he won three stages and the points classification and, as his victory at the 2009 Milan-San Remo demonstrated, he is more than capable of contesting a sprint finish at the end of a 260km race.

Opinion on the nature of the Geelong course continues to be varied. While Cavendish’s sprint rivals Oscar Freire (Spain), Tyler Farrar (USA), Thor Hushovd (Norway) and André Greipel (Germany) will all be present and hoping for a bunch finish, Paolo Bettini did not name a recognized sprinter to his Italian squad.
Posted by Recovox at 5:51 PM