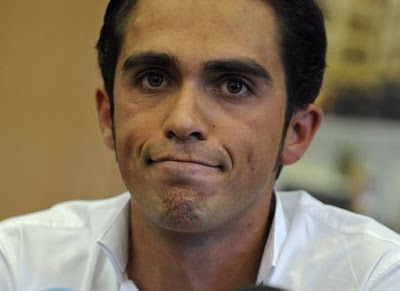 Tour de France winner Alberto Contador vigorously defended himself today after announcing that he had tested positive for the banned drug Clenbuterol during the Tour's second rest day.

The Spaniard pointed to a cut of meat he shared with his teamamtes on the rest day in Pau as the source of the contamination. His scientific expert, Douwe de Boer, detailed a long list of reasons on how Contador's explanation is plausible and argued that the amount detected should never have been declared a doping positive.

The Associated Press spoke with several physicians, who have backed up the theory. Dr. Andrew Franklyn-Miller, a team doctor for Britain's rowing team agreed that the amount found would have not provided any performance boost.

Dr. Michel Audran, an expert in doping controls, also agreed that the contamination theory was plausible based on the amount found.

However, other anti-doping champions have offered up a different theory: that Contador transfused his own blood on the rest day, and that blood contained evidence of earlier Clenbuterol use.

German journalist Hajo Seppellt accused the UCI of trying to hide the doping case by denying it when asked earlier this week, and raised the possibility on a German television program that the source was actually a contaminated transfusion.

Biological passport expert Rasmus Damsgaard, the man behind the independent testing program previously used by teams such as Saxo Bank, also offered up the same tainted transfusion theory in an SMS to Danish TV2 Sport.
Posted by Recovox at 6:16 PM