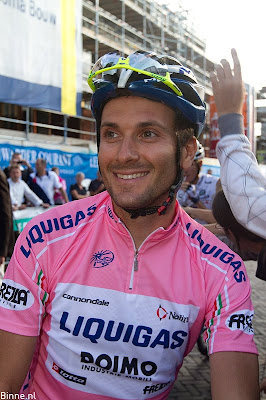 Giro d’Italia winner Ivan Basso (Liquigas-Doimo) is prepared to work for his teammates Peter Sagan and Daniel Oss at this week’s Canadian ProTour races. The two one-day races are expected to be held in wet conditions in Quebec City on Friday and Montreal on Sunday.

“It is a pleasure for me to be in Canada,” Basso said. “I think it is really nice for me to do these two important races to finish off my season, but after the Giro d’Italia and the Tour de France my form at the moment is not 100 percent.

“I feel good but it is normal after racing the Giro and Tour; it is hard to arrive to the end of the season in really good shape,” he added. “Our plan is for our good riders Sagan and Oss, who are both feeling very good. So we will try our best with them.”

The Grand Prix Cycliste de Quebec City will challenge the peloton to 15 laps of a hilly and highly technical 12.6 kms circuit, which begins on the Rue Saint Louis, descends through the scenic Parc des Champs de Bataille and winds its way down to the shores of the Saint Lawrence River. The men will weave their way up the steep inclines of the historical centre before passing through doors to the city - Porte St Jean and Porte St Louis - and head back up to the start-finish line on the Rue Saint Louis.

“I think the circuits will be more difficult than a point-to-point race because you always come back to the climb and it isn’t easy to catch a break if it is a big one,” Basso said. “The strategy of the team; it will be important never to use the whole team to bring back one breakaway. We have to be in the break, all the time in the front and make sure to finish with three guys in good shape, with a lot of energy, to be ready for the last hour of the race.”

According to Basso, the circuit-style events are well-suited to the young Sagan, who won two stages of the Tour of California, two in Paris-Nice and a stage at the Tour of Romandie. Oss is an all-rounder who this year place in the top 10 at the Giro della Provincia di Reggio Calabria, Tour of Oman and Gent-Wevelgem.

Basso won his second Giro d’Italia this year in difficult conditions that made for perhaps one of the most epic editions in the event’s history. Basso won stage 15 atop Mount Zoncolan and he took over the pink leader’s jersey following stage 19.

“We have to keep the morale high and not think about the weather,” said Basso regarding the weekend’s forecast. “I did 13 days under the rain at the Giro d’Italia this year so I have good training.”

Race organisers of the Grand Prix Cycliste de Quebec City and the Grand Prix Cycliste de Montreal secured a five-year ProTour license in part because of the International Cycling Union’s (UCI) effort to globalize professional cycling. They are the first ProTour event in North America but next year there is a strong possibility that the Giro d’Italia could start in Washington DC, USA.

“It is very nice and important to race all over the world,” Basso said. “I have a good impression of this organisation already with a fantastic hotel [Fairmont Le Chateau Frontenac]. We arrived three days before so there is no jet-lag. It is a lot of work for the organisation but we appreciate their efforts.”
Posted by Recovox at 11:08 AM