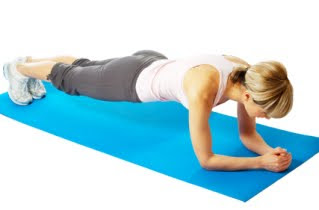 I don’t like situps, crunches, or most of their derivatives, as “core workouts.” Yeah, doing a ton of crunches day in and day out will get you perpetually sore abdominals, but that’s an improper usage of our torso. The core does not exist to contract or bend over and over again; it’s there to resist force. We need strong cores in order to maintain a stable torso while putting in work, whether it’s lifting heavy things, carrying a heavy load, or transferring power from our hips while throwing a punch or a ball. Having that stable, strong core with the capacity to resist the influence of outside forces is far more important than having the capacity to perform a million situps.

The plank is a far more useful core exercise. The key to success with it is right there in the name: you’re forming an immovable, stiff plank with your entire body. From toes to head, you must be firm, not flaccid.

How to Do the Basic Plank

1. Get in the pushup position, only put your forearms on the ground instead of your hands. Your elbows should line up directly underneath your shoulders. Toes on the ground.
2. Squeeze your glutes and tighten your abdominals.
3. Keep a neutral neck and spine.
4. Create a straight, strong line from head to toes – a plank, if you will.
5. Hold that position.

1. Don’t let your hips sag down to the ground. Sagging hips makes the exercise initially easier, but it’s not a plank and it defeats the purpose of the exercise.
2. Look down at the ground. This is a good prompt for maintaining a neutral neck position.
3. When your form begins to suffer, pull the plug. You’re only benefiting from the plank by actually doing the plank.
4. Level 4 of Primal Blueprint Fitness Lift Heavy Things also incorporates the Side Plank.

Even if you never progress (or choose to progress) to the other plank variations, the basic plank, performed properly, will be sufficient for developing good core stability.

Watch this video on proper form and technique for the first 4 of 9 total plank movements in the PBF Lift Heavy Things bodyweight progression.

This is a good tips for us. Thanks for sharing it and the video as well.