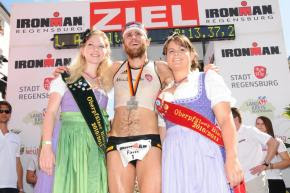 The inaugural Ironman Regensburg is in the books, and what a race it turned out to be. With excellent weather, an incredible venue and great racing in both the men's and women's field, what more could you ask for.

In the men’s race Christof Wandratsch was expected to lead the men out of the water and he didn’t disappoint those who intended to let him tow them through the swim. Andi Bocherer, Stefan Richter and Faris Al-Sultan just did that. What wasn’t expected was for Bocherer to get spit off the back with 1,000 meters to go. Wandratsch lead Horst Reichel and Al-Sultan out of the water 0:11 back, while Bocherer was disappointed with hitting the beach 1:01 back to the leader.

Early on the bike, Bocherer made his move to the front of the race with Al-Sultan and Reichel following 0:05 to 0:07 back to the leader. Quickly this became the elite group - they quickly disposed the remainder of the field for until the conclusion of the bike.

At 80 kilometres, in typical Bocherer fashion, he ramped up his speed and slowly distanced himself from both Al-Sultan and Reichel. During the later stages of the bike, Reichel succumbed to the pace and faded badly. Al-Sultan was the only one that could keep his hard-driving Team Abu Dhabi teammate within his sights, and would eventually come into the bike-run transition 4:21 down to Bocherer.

Both Bocherer and Al-Sultan had the same game plan for the run; take it out controlled for the first two laps, strong for last two laps. Bocherer’s lead slowly dwindled throughout the first half the marathon. Al-Sultan managed to claw back time during the first two loops, but Bocherer still enjoyed a 2:47 lead at the halfway point.

“I blew, I just blew up at 30 kilometres,” Bocherer would say after the race. Al-Sultan showed his experience and quickly closed the gap and surge past the struggling Bocherer.

“I went by him strong, as I didn’t want him to follow me,” Al-Sultan said. “Then I got a side stitch and just about cramped up, the last thing I wanted to do was have him go past me because I was hurting,” continued the three-time Ironman champion.

Bocherer came in 4:51 behind Al-Sultan. He explained how would have preferred a different outcome to the race, “I went for the win today and came up short, but I am satisfied that I tried.” He smiled a little, while saying, “I am getting closer.” He can have some consolation from his race; he had the fastest bike split on the day at 4:23:16.

Germany’s Nils Goerke ran his way into third on the day while pounding out the fastest marathon split, 2:48:07