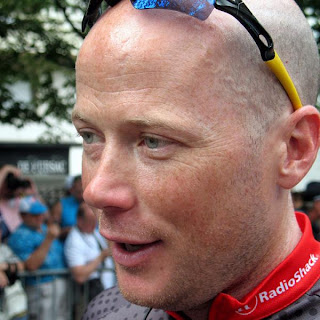 Chris Horner (RadioShack) says that he would gladly have swapped his top ten placing at the Tour de France to have ridden in the service of an overall winner. In an interview with the Bend Bulletin, the American spoke of his regret at Lance Armstrong's failure to land an eighth yellow jersey in Paris.

"When I was training with Lance in Aspen before the Tour last year, we talked about having a new team and that I'd be on it, and going to the Tour and helping him win it. So when you see he's crashed, it rocks everything that you've been focusing on for the whole year. For me it was kind of devastating," Horner said.

Horner has never ridden on a Tour de France-winning team. He was one of Cadel Evans's key lieutenants at Lotto when he finished second in the 2007 edition and last year he failed to make the Astana team that included overall winner Alberto Contador.

Horner appeared nonplussed by the fact that the time he lost waiting for Armstrong on his disastrous stage to Morzine may ultimately have cost him a significantly higher placing in Paris. "I didn't have the legs to go with Andy [Schleck] and [Alberto] Contador, and [Denis] Menchov had a fabulous time trial in the last TT stage, so I don't think I could've done top three," he said, admitting that sixth place would have been the summit of his ambition in any case.

That said, the 38-year-old Horner already has an eye on next year's race and fired an early blow in the race to lead RadioShack next time around. "Hopefully, I've earned a position on the team to be riding the Tour as one of the favorites, and I'll be a guy who's being looked after," he said.

Now in his fifteenth year as a professional, Horner said that he has not been called to testify in the Jeff Novitzky-led federal probe into doping, nor does he expect to, as he did not ride for Armstrong's US Postal Service squad.

"I haven't gotten any calls, and I wouldn't think I would get calls because I wasn't on [Armstrong's U.S. Postal Service] team then. Since the Tour of California, when all that stuff came out, none of it has affected me," Horner said.
Posted by Recovox at 11:47 AM