Jens Voigt Did it Again! 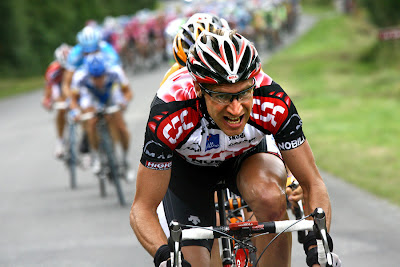 The spectators witnessed a regular deja vu on Thursday, when they watched Team CSC's German freight train Jens Voigt take a comfortable victory in fourth stage of Vuelta Ciclista a Pais Vasco – his fourth victory in the history of this particular race.

For the second day in a row Voigt was part of the early break and with about 45 kilometers left of the 176-kilometer stage from Vitoria-Gasteiz to Lekunberri he dropped the other members of the break and never looked back.

This M.O. was practically identical to Voigt's previous victories in Vuelta Ciclista a Pais Vasco (in 1998, 2004 and 2005), and the spectators showed their appreciation and support for the German Team CSC rider all the way to the finish line. Sports director Kim Andersen was also full of admiration after the stage.

"It was truly brilliant. Not just the victory – but the way he did it. He initiated the break himself after 80 kilometers and took nine other riders along with him. Then about 50 kilometers before the end he suffered a flat, which meant extra work to catch up again. But he managed and after that he dropped them just like that. It was fantastic," said a very excited Kim Andersen.

The performance was even more impressive considering the fact that Voigt was also in a break yesterday during the third stage, where he ended up being dropped on the final climb.

"Yesterday I didn't feel that strong and the riders in the break were very strong. I felt much better today. Already from the beginning of the break I got the feeling that my chances were better today. And yes, when the opportunity arose I made a move. I like to keep my tactics simple – that's the best way for me," explained Voigt.
Posted by Recovox at 9:55 AM