Riis: No regrets about Basso 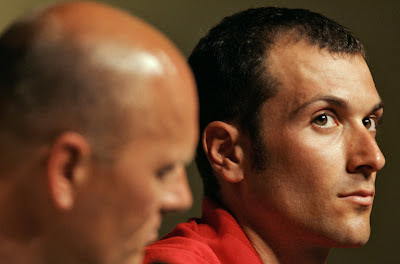 On Tuesday, Discovery Channel was forced to suspend the ex-CSC captain after Italian authorities decided to re-open a probe into Basso's alleged links to the Operación Puerto blood doping scandal.

"I have no regrets. I couldn't do anything else than what I did. It was my decision. I cannot change the past. I prefer to focus on the future," Riis told VeloNews. "It was difficult to see Ivan leave the team because we worked so hard, but we took the decision and I am still confident with it."

Last summer, Riis was forced to make the painful decision to part ways with his skilled protégé after Basso's name popped up in the Operación Puerto police dossier.

But Riis had a feeling that wouldn't be the end of the Puerto story. Prosecutors in Germany earlier this month confirmed that a DNA sample taken from ex-rider Jan Ullrich matched with nine bags of blood seized in police raids last May.

That prompted Italian authorities to reconsider the Basso allegations. Instead of racing in this week's Ardennes classics, Basso is scheduled to appear before an anti-doping prosecutor next Wednesday, May 2, and his participation in next month's Giro has been thrown into doubt.

That was precisely the scenario Riis wanted to avoid when he decided to end his close relationships with the Italian.

"I was thinking about the team. The team was more important than to keep going on with this doubt hanging over the team," Riis told VeloNews last month. "I couldn't spend my energy on it and I didn't want the team to be bothered by it. We want to race our bikes and not be distracted about anything else."

Riis and Basso forged a close relationship when the inexperienced but promising Italian joined Team CSC in 2004. Under Riis's tutelage, Basso evolved into a legitimate grand tour contender, finishing second to Armstrong in his final Tour in 2005 before taking an overpowering victory in the 2006 Giro.

When asked what his reaction about seeing Basso in the uniform of rival Discovery Channel, Riis refused to take the bait.

"I have no comments about Ivan. We were in agreement that he was free to go. That's it, there's no more to discuss," he said. "I don't want to discuss that he's with Discovery. This is not my business. If I didn't want him to ride with another team, I should have kept him. I can understand while any team would want to pick him. Operación Puerto or not, he's a good rider."

Riis expressed frustration about how the Spanish doping scandal continues to overshadow cycling. No other CSC riders have been linked to the scandal and Riis said he's turned the page following Basso's departure.

"For me, this case was over a long time ago. In general, there's been so much confusion with what's going and what's not going on. We cannot do anything about it," he said. "We moved on a long time ago. I don't want to talk about it. I don't want to hear about it anymore. I am sick and tired of it. We have more serious things to do than talking about Operación Puerto."

Riis said the team has demonstrated it can be competitive without the dominant presence of Basso, who was tapped by many as the heir apparent to Armstrong at the Tour de France.

"I think you have to look from the end of the Tour de France last year until the end of the season, we proved have a very strong team even without Ivan," Riis said. "We managed to keep up the confidence, the morale and motivation to do some good things. We came through a good winter, a good training camp and we've had a good start of the (2007) season. We are pretty confident coming into the season and I don't think we have too much to worry about."

In the wake of the Puerto scandal and Basso's difficult departure, Team CSC has since instituted a groundbreaking anti-doping program. Independent and mostly out-of-competition controls are conducted by Danish anti-doping crusader Rasmus Damsgaard, who was contracted by Riis to run the program.

Since its introduction last winter, Damsgaard's team has conducted more than 300 controls in Europe, the United States, Australia and South Africa. Test results are shared with the UCI and any positive tests will face the same scrutiny as WADA-sanctioned controls.

"I want to prove that my team can be clean and still be good. This is the proof and this is what I want to show the world," Riis said. "I believe in the team. I know they can do it. There's no hocus-pocus. I know there are some who still don't believe us, but we will prove it."
Posted by Recovox at 7:13 AM