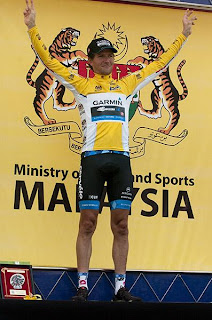 As expected, pre-stage favourite David Zabriskie (Garmin-Barracuda) took out the opening 20.3 kilometre time trial at Le Tour de Langkawi on Friday with a time of 0:24:34.18. Zabriskie now wears the first yellow jersey of the 2012 stage race.

Roman Van Uden (New Zealand) was the first man out of the start house but it was his cross-Tasman rivals who set the day's benchmarks for the heavy hitters like Zabriskie and teammate Tom Danielson to chase.

Drapac's Darren Lapthorne stopped the clock at 0:25:44.85 before teammate Adam Phelan set the new best time of 0:25:34.48. Langkawi marks Phelan's first race since a severe concussion in December while on a team training camp ruled him out of the Australian Road Championships and the New Zealand Cycle Classic. Admitting that his time in the hot seat may have be limited with Zabriskie and Danielson yet to start, the 20-year-old could never have imagined that his time would stand for as long as it did.

Last March, Phelan won the prologue time trial at the Tour of Taiwan but he admitted that the 20.3km distance on Friday was a new frontier: "I had no experience with 20km time trials," he said.

Joe Cooper (New Zealand) moved into third position with his effort but soon after Zabriskie had left the start house and had set a new best time of 11:25 at the first time check. At the halfway mark, the US National Time Trail champion was just over half a minute up on Phelan and the podium was set for the slightest of re-shuffles.

Danielson could only manage fourth, ensuring the Australian pair would flank Zabriskie on the podium. 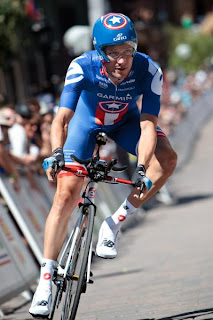 "I am very happy to wear the yellow jersey," Zabriskie said following his win. "Today I was fine, I was excited to start my 2012 with a time trial. The course suited me and the roads were great, I had no references in the race lap times, I went by instinct. It is always nice to win, I'm happy."

Stage 2 of the Le Tour de Langkawi continues on Saturday with a 151km sprint stage from Putrajaya to Melaka.
Posted by Recovox at 12:05 PM

There are some natural remedies that can be used in the prevention and eliminate diabetes totally. However, the single most important aspect of a diabetes control plan is adopting a wholesome life style Inner Peace, Nutritious and Healthy Diet, and Regular Physical Exercise. A state of inner peace and self-contentment is essential to enjoying a good physical health and over all well-being. The inner peace and self contentment is a just a state of mind.People with diabetes diseases often use complementary and alternative medicine. I diagnosed diabetes in 2010. Was at work feeling unusually tired and sleepy. I borrowed a cyclometer from a co-worker and tested at 760. Went immediately to my doctor and he gave me prescription like: Insulin ,Sulfonamides,Thiazolidinediones but Could not get the cure rather to reduce the pain but brink back the pain again. i found a woman testimony name Comfort online how Dr Akhigbe cure her HIV  and I also contacted the doctor and after I took his medication as instructed, I am now completely free from diabetes by doctor Akhigbe herbal medicine.So diabetes patients reading this testimony to contact his email     drrealakhigbe@gmail.com   or his Number   +2348142454860   He also use his herbal herbs to diseases like:SPIDER BITE, SCHIZOPHRENIA, LUPUS,EXTERNAL INFECTION, COMMON COLD, JOINT PAIN, EPILEPSY,STROKE,TUBERCULOSIS ,STOMACH DISEASE. ECZEMA, PROGENITOR, EATING DISORDER, LOWER RESPIRATORY INFECTION,  DIABETICS,HERPES,HIV/AIDS, ;ALS,  CANCER , MENINGITIS,HEPATITIS A AND B,ASTHMA, HEART DISEASE, CHRONIC DISEASE. NAUSEA VOMITING OR DIARRHEA,KIDNEY DISEASE. HEARING  LOSSDr Akhigbe is a good man and he heal any body that come to him. here is email    drrealakhigbe@gmail.com    and his Number +2349010754824