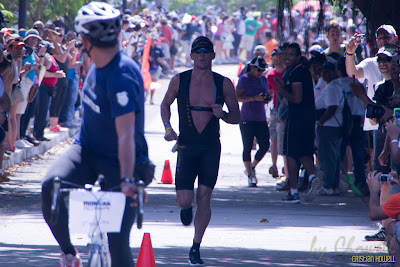 World Triathlon Corp. is in discussion with Comcast Corp. (CMCSA)’s NBC network about televising live part of its 2012 Ironman World Championship in Hawaii as Lance Armstrong targets a spot in the race.

Andrew Messick, World Triathlon’s chief executive officer, said he’ll be “much more aggressive” in getting television coverage for its marquee race because of Armstrong, a seven-time winner of cycling’s Tour de France. NBC currently televises the annual championship race in Kailua-Kona on tape-delay about two months after it takes place.

“We want to investigate opportunities to be able to potentially put parts of the race live, something that has never been done in the U.S.,” Messick said in an interview yesterday in San Diego, California, where he is attending the Triathlon America Business of Triathlon conference. “Lance brings a spotlight to our sport that’s brighter perhaps than anything that has ever happened.”

NBC Sports is “happy our long-term relationship with Ironman runs through 2018,” spokesman Chris McCloskey said in a telephone interview. He declined to comment further.

Armstrong, 40, finished second in his first 70.3-mile half Ironman race on Feb. 12 in Panama City, Panama, an initial step in his quest to qualify for triathlon’s World Championship. Armstrong was overtaken in the final two miles by New Zealand’s Bevan Docherty, a two-time Olympic medalist.

The race, which consisted of a 1.2-mile swim, 56-mile bike ride and 13.1-mile run, wasn’t televised and there was no live video stream on the Internet. Text updates of the event drew 150,000 unique visitors to Ironman’s website, Messick said, up from about 7,500 for similar races a year earlier.

11th Hour
“The race in Panama came about at the 11th hour and we made a decision that it probably wasn’t the right thing to do to put a ton of audio and video resources behind it,” Messick said. “We had very little time to talk about it and get ourselves organized and do the kind of job that we felt we needed to.”

Armstrong, whose Livestrong cancer charity foundation has a sponsorship agreement with World Triathlon, will also compete in half Ironman events in Texas in April, Florida in May, and Hawaii on June 2.

For those races, Messick said Ironman plans to increase its online coverage to include video and audio to spotlight Armstrong’s participation. Armstrong competed as a professional triathlete at age 18 before focusing on cycling.

“Our opportunity as a sport is to use the fact that we have an athlete like Lance and use it to bring more people into triathlon,” Messick said. “There’s going to be a lot of opportunity for people who successfully embrace that.”

Armstrong will race his first professional 140.6-mile full Ironman event June 24 in Nice, France, as he seeks to earn enough points to qualify for the Oct. 13 World Championship in Hawaii. He currently ranks 58th with 1,200 points. The top 40- ranked professionals by July 29 will qualify.
Posted by Recovox at 11:25 AM