Lance Armstrong Is Back! Stunning 2nd Place Answers The Question If He Could Return To Triathlon And Win..... 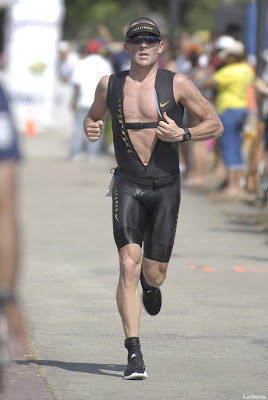 The pre-race hype surrounding today’s Ironman 70.3 Panamá triathlon focused mostly on the fact that seven-time Tour de France winner Lance Armstrong would be making his first start in a road triathlon in more than 20 years. Although they didn’t get quite as much pre-race attention, there were other important stories taking shape. Who would take advantage of the early-season opportunity to earn important Kona Pro Ranking (KPR) points? How would two-time Olympic medalist Bevan Docherty fair in his first half-iron distance race in 12 years? Would Leanda Cave show the same great form that led to her first Ironman victory in Arizona at the end of 2011? How would the heat and wind of Panamá affect the outcome? All of these questions were answered.

American Matty Reed, who was the most outspoken about his concerns that Armstrong would receive an unfair advantage with a media circus surrounding him on the bike, led the men out of the Panama canal and into T1. His blazing 1.2-mile swim time of 18:49 came with the help of a current. The time didn’t give him much of an advantage as four men, including Bevan Docherty and Rasmus Henning, were right on his heels. Armstrong turned in the 10th fastest swim of the men, exiting in 19:22 and just ahead of fellow super cyclist Chris Lieto.

It was France’s Bertrand Billard, not Lieto or Armstrong, who pushed the pace early on in the bike. Just 12 miles in, Billard had built a lead of 1:40 over the chase group. About halfway into the bike Armstrong and Lieto took charge, leading the effort to catch the Frenchman. Also in the group with the fast-riding Americans were Henning, Richie Cunningham (AUS), Docherty, Oscar Galindez (BRA) and Romain Guillaume (FRA). Eventually Armstrong, Lieto and Galindez broke away from the rest of the group as they continued to pursue Billard. Billard’s effort on the 56-mile bike course proved to be too much, as Lieto caught him in the final stretch.

It was Lieto leading early efforts on the half-marathon course, with Billard and Armstrong chasing close behind. Billard faded quickly and eventually dropped out. Armstrong’s seemingly conservative effort on the bike paid off. At about three miles into the race Armstrong passed Lieto to take the lead. Armstrong held onto to the front position for the majority of the 13.1 miles, but the win was not meant to be his. A fast-running Docherty passed Armstrong in the final mile of the race to post a run split of 1:12:50 and take the win in 3:50:13. Armstrong’s 1:17:01 half marathon earned him second, finishing just 42 seconds behind Docherty. Cunningham earned the final podium spot thanks to a well-rounded day.
Posted by Recovox at 3:01 PM