DZ - A Unique Start to the Year 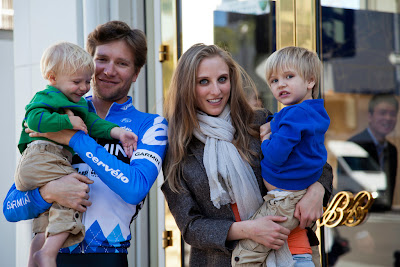 Art Crimes
The kids are into crafts and we’re encouraging their artwork. Maybe too much. A little graffiti on the house tends to add a not-so-subtle touch to the décor. But I like it. Encouraged, the boys suggested they ‘tag’ the neighbor’s house too. Well even their free-spirited dad has to draw the line at times and get these boys used to at least a little disappointment.

A Camp Unlike Any Other
I’ve missed the official training camp this year in Spain. It’s the first time in my 13 years as a pro. The team trusts me enough to get my training done at home and show up ready to race. So I stayed in California post the new year as it really didn’t make sense to go to Europe with my first race being in Malaysia. It’s simply easier for me to get there from here and I get to skip a whole lot of unnecessary jet lag. We’ve had some great weather here and I’ve gotten in some great training on the local roads where my motivation is always high and I get to come home after every ride. The local Four Seasons in Westlake Village has even thrown in some support and allowed me use of their sauna in prep for my first race (Le Tour de Langkawi) which will be a hot one. Going to the hotel kind of gave me that camp feeling a little bit…or maybe not.

Kid’s Club
I recently did a small ride with the Oaks Christian High School Bike Club around the Westlake area. It was great to meet the teacher, Rich, who started the club and is carefully but enthusiastically nurturing his students interest in all things cycling. The kids were cool and fun for me to see how excited they are to ride their bikes. It brought me back to some long forgotten memories of my youth. Because their riding time is limited (it’s in the middle of their school day) these kids even get neutral support on their rides from the local shop, Win’s Wheels. Nice. I saw one of the young riders recently at Starbucks. I said ‘ciao Taylor’ and could tell he was amused by my ability to remember him.

A Different Kind of Recovery
I was pleased to be invited to visit with a group of recovering Vets who were participating in a Ride2Recovery training camp in my area. These were wounded x-military folks who are using the bike to benefit their mental and physical rehabilitation. This is a unique program run by some unique people who know the healing value of the bike. I did a little evening Q&A, took some photos and signed some autographs. The folks were kind and appreciative but it really was I that was blown away by their stories.

Fast, Faster, Fastest
I finally got my hands on the highly anticipated P5 TT bike. I did some photos and tested a few postions in the wind tunnel in San Diego. It is a fast machine. Just looking at it gives me motivation to want to hand out some whoop-ins. It was kind of a last minute deal to go down to San Diego from LA. I was on the last day of a big training block so it was a bit of a rush to finish up in the tunnel and get on the road and get the riding in. I finally hit the road at about 1pm and just went up and down Palomar Mountain until the sun dropped. I ended with nearly 12,000 ft in 60 miles. Finally jumped in the car which for some reason was a team car with a cool dude named Austen behind the wheel. He represents a Tri guy and was in San Diego talking to Cervelo and volunteered to help me out, so thanks Austen. He didn’t complain once and seemed pretty pumped to be helping out which which made the experience all the more enjoyable for me. I finally found a shower (thanks Albert) and then the wife and kids found me and we were back off toward LA.

Let’s Mess That Mouse Up
With a big block in the legs and a few rest days on the horizon I said, ‘WE’RE GOING TO MOTHER-FUCKING DISNEYLAND BITCHES”…ok so maybe I only said that in my head…but we pulled into a hotel called the Grand Californian and it was packed. The parking attendent said, ‘good luck if you don’t have reservations.’ The hotel was full of parents and kids and strollers, really some of the biggest strollers I’ve ever seen. All the rooms were taken and I was cracking fast so I was about to bag it and I said let’s go home. But my 3 year old said ‘Nooooo’. Whoa, he must know that he is close to some magic. So I find a new hotel and they have space, but it takes the guy forever to book me in because he has never had a walk-in before. I was throwing this place for a real loop. I eventually went out to the car with a room key and my son screamed, ‘WOO-HOOOOO!’ Finally a room with a warm bed and excited kids, but I was so tired that suddenly it was only sleep that filled my world.

Morning came soon enough and it was time to find our way into the park. I was buying tickets and dropping major cash like the rest of the crazies when the ticket woman asks, ‘Where you from?’ I know she’s going to try and sell me something I don’t want so I say I’m from Alaska. But then she asks me for my ID and credit card and of course it says California. We eye each other for a brief moment and then she silently smiles.

Walking around Disneyland was quite the experience. I really couldn’t believe how busy it was. I wanted to tweet some pics but I thought my teammates would be a little pissed that they were racing in the cold and snow and here I was at Disneyland. It was cool to walk around with the kids and we put in the full day and night there and the crowds never died down. Favorite ride for the kids was It’s a Small World. Worst moment was when the one year old woke up in the stroller covered in shit. As they say, ‘shit happens’ and sometimes it sqeezes out and goes up the back. Well that sucked big time. We finally said ‘see you later’ to Disneyland, all that magic and dreams coming true and headed for home. I was wired for the drive after I found the Peet’s Coffee and off we went, the whole family charged up from the day.

ATOC
Tommy D. was in the area for some training but we didn’t really get to ride together. I think he was waking up early trying to get his riding done so he could maximize his family time as his wife is pregnant and not going to be joining him in Europe. However, we did meet up at the press presentation for the Amgen Tour of California. That event was pretty cool as it was held right on Rodeo Drive in Beverly Hills and Tommy and I, Horner and the actor and Amgen’s Breakaway from Cancer spokesperson Patrick Dempsey got to ride with a police escort down the famous boulevard. The press event was fun but also a stark reminder that this race continues to be dialed up. I still can’t believe they’re going to start the last stage in BH. The TT has moved from Solvang and will now be in Bakersfield and is going to be a hard one this year. Actually, I don’t think there’s going to be one easy day during the entire race. Now they are even including Mt. Diablo, which should be some good fun. I do miss the Bay area, but not the rain. Below are a few photos from the press event shot by fellow cyclist and photographer Gus Corona. I hope to see you all at the race.
Posted by Recovox at 12:02 PM