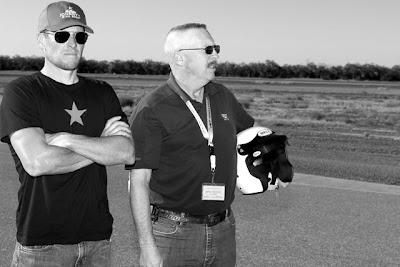 As the European-based riders climbed a mountain for their first official rider meeting, American-based riders also went off the beaten path for their first team get-together. It’s safe to say all Team RadioShack riders have a “need for speed.” And Tuesday morning this urge was answered…While attending camp, our sponsors at Nissan wanted to add a little “innovation” to traditional team-building activities and training rides, so they invited us to the Nissan Arizona Test Center in Scottsdale.


With over 3,000 acres and 46 miles of test roads, it remains one of the largest and most innovative automotive testing centers in the world…And as we soon found out – the perfect place for a cycling team with a “need for speed” to do some team-building.

Naturally a competitive bunch, several challenges quickly unfolded. With bikes on hand, the riders raced a two-mile time trial course. Despite the veteran field, Bjorn Selander took the win. Perhaps Lance and Levi were saving up for the real competition of the day….the AutoCross Challenge. Each rider would race along a course marked by orange cones in a Nissan 370z. As the rules allowed each driver three runs, the best posted time would be taken for each rider.

And so the competition began! Levi, a proud owner of a custom-Team RadioShack GTR, was feeling confident in his ability to “master the shift” and maneuver the course like a true professional. However earlier that day, Chris Horner raised a few eyebrows becoming the first person the Test Center has ever seen to strip the tires off a Nissan Leaf. One thing was clear: Redneck Horner was not afraid to take the turns full-gas.

Despite Horner being deemed the day’s “biggest dare devil” and Levi’s taunts, Lance edged both longtime teammates and friends to win the Challenge. Also on hand was Trek-LIVESTRONG director Axel Merckx. Axel represented the team directors of the world with an aggressive-style of driving unmatched by any of the riders. Congrats to Axel for taking the day’s “Most Aggressive Driver” award. Trek-LIVESTRONG is lucky to have him behind the wheel...

click on the title link to see more photos....
Posted by Recovox at 4:24 PM