Garmin-Cervelo Batmobiles and a public ride 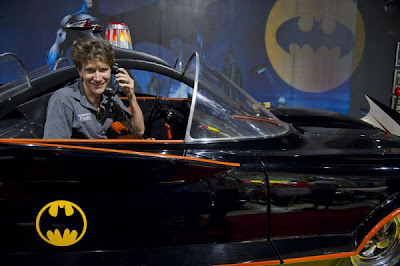 Grand Cayman continued to roll out the red carpet for the Garmin-Cervelo squad's first gathering of its 2011 roster. On Wednesday the team enjoyed time swimming with stingrays, exploring the island of Grand Cayman via a treasure hunt plus an exhilarating helicopter view of the Caribbean island with a former military pilot putting the aircraft through its paces.

Another venue visited by the team was the Cayman Motor Museum, chock full of exotic, rare, and classic cars and motorcycles from the personal collection of Norwegian shipping magnate Andreas Ugland, who's called Grand Cayman home for 20+ years. While

David Zabriskie was spellbound by the original Batmobile from the late 1960s Batman television show, world champion Thor Hushovd received a warm welcome from Ugland, a compatriot who happens to share the same hometown of Grimstad in Norway.

On Thursday morning the team took part in the 'Ride with the Pros' event in which approximately 85 riders, comprised of sponsors and local cycling fans, rode for approximately two hours on quiet Grand Cayman roads. While the pace was predominantly leisurely, the team dropped the hammer in the latter portion of the return journey to their host hotel to give those along for the ride a lesson in speed and the art of riding in wide open terrain buffeted by strong crosswinds. The planned acceleration was public knowledge from the offset for those along on the ride but as one would expect the Garmin-Cervelo squad soon shed their companions and rode alone along the coast before dialling back the throttle and allowing many to catch back on for the final kilometres.

"There's a lot of people on this island who hosted us and supported bringing the team here and part of our thank you was to do a bike ride with them," Jonathan Vaughters told us. "I have a big payroll these days and I can't just take 80 people off to the Cayman Islands. We've worked with Grand Cayman's Tom McCallum to drum up the support and he's done an incredible job of getting government support and everything else to get this camp off the ground. He gave me the thumbs up of 'yes, we can do it' a couple of months ago and here we are."

Part of the team took advantage of an opportunity to scuba dive in the afternoon hours and the day was capped off by An Evening with the Pros gala at Camana Bay's Abacus restaurant where the team mixed and mingled with VIPs. The event concluded with an auction of Garmin-Transition team bikes and memorabilia to benefit the Cayman Island Cancer Society.
Posted by Recovox at 10:36 AM