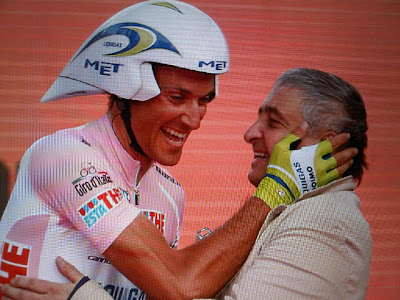 Ivan Basso went training with his Liquigas teammates on Monday morning but admitted it was a difficult day in the saddle after hearing the news that his coach Aldo Sassi had passed away during the night.

Basso knew Sassi was not well said he will leave the Liquigas training camp in Sardinia to attend Sassi's funeral.

The two have been close ever since Sassi agreed to coach Basso as he made a comeback from his two-year suspension. The two spent long hours together simulating races near Varese and developed a special affinity when Sassi was diagnosed with cancer. Basso lost his mother to cancer in 2005.

"It's very sad news and it's difficult for me to express how I feel," Basso told us.

"I'll always remember the close relationship I had with Aldo. I did a test at the Mapei centre last Tuesday and that was his last day there.

"I had a special relationship with Aldo because of what I've been through and for what he was going through. He was a very understanding and affectionate person. He was one of the few people who really understood me. We had some special moments together during my comeback and then on the podium in Verona at the end of the Giro.

"It's been a difficult time for him since he was diagnosed with cancer but he was an example to us all how he fought hard and carried on."
Posted by Recovox at 11:37 AM